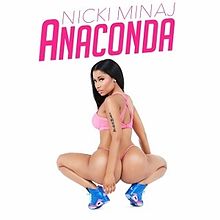 “Anaconda” is a song by American recording artist Nicki Minaj, from her upcoming third studio album, The Pinkprint (2014). It was released on August 4, 2014 by Young Money Entertainment, Cash Money Records, and Republic Records as the second single from the record. Production for the track was handled by Polow Da Don and Da Internz.

In 2012, the song was originally recorded by five-time Grammy Award-winning musician Missy Elliott, however due to undisclosed reasons Elliott shelved the track and was then re-recorded by Minaj. The cover art for the single went viral on the web after being revealed. On various digital music stores, the cover is censored with a Parental Advisory label over her backside. The song samples “Baby Got Back” by Sir Mix-a-Lot.

In the United States, the song debuted at number 3 on the Digital Songs chart selling 141,000 digital downloads in its first week. Additionally, as Minaj shares lead credit on “Bang Bang”, which was number 2 on that same chart in the same week, Minaj became the first lead act to have two concurrent songs in the top three of the chart since the September 22, 2012 list. On the Billboard Hot 100, the song debuted at number 19, marking Minaj’s 51st Hot 100 hit and subsequently breaking out of a tie with Michael Jackson for overall career Hot 100 entries.

A music video for the track was shot in Los Angeles, California by Colin Tilley and was released on August 19, 2014.