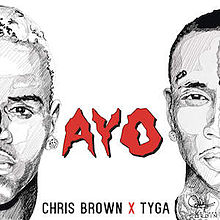 “Ayo” is a song by American singer Chris Brown and American rapper Tyga, released as the lead single from their upcoming collaboration album Fan of a Fan: The Album. The track was produced by American record producers Mark Kragen and Nic Nac, whom Chris previously worked with on “Loyal”.

The music video features Tyga remodeling his house while Chris Brown throws a house party. The pair flaunt their wealthy lifestyle at the mansion in a montage of scenes that includes a gold toilet, a live tiger, fencers by the fireplace, female models playing polo on horses, and a cameo by the dance duo Les Twins. They later meet up and race their Lamborghini’s while Mike Epps receives oral sex in his police vehicle. Epps announces that Chris is out of jail and supposed to be doing community service while chasing the two across the bridge.The video ends with Chris and Tyga stepping out of their vehicles and the video cutting off, implying that a sequel will me made out of the next single.