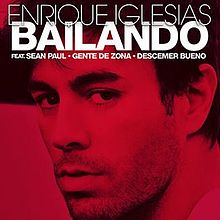 “Bailando” (English: “Dancing”) is a song by Spanish singer-songwriter Enrique Iglesias for his tenth studio album Sex and Love (2014). The Spanish version features the Cuban group Gente de Zona and Cuban singer Descemer Bueno, while the Spanglish version features Jamaican singer Sean Paul. A version of the song in Portuguese with Luan Santana was released in May 2014 with the original artists of the song. They are being released by Universal Republic Records as the sixth single from the record. The song was written by Iglesias, Bueno, and Alexander Delgado and Randy Malcom Martinez of Gente de Zona, while production was handled by Carlos Paucar.

The song was originally recorded by Gente De Zona. In an interview he gave to Univision Musica, backstage at the Premios lo Nuestro he told the reporter that when Descemer presented the song to him, he initially did not like it and did not want to record it. But after recording he loved the song. He termed it as one of his favourites from the album.

The official music video aired on Univision channel on 10 April 2014 and was premiered worldwide on 11 April 2014 through Iglesias’ official Vevo account. The music video is directed by Cuban producer Alejandro Perez, under Enrique Iglesias’ longtime collaborators, creative director Yasha Malekzad & executive producer Kasra Pezeshki. The music video was produced by Artist Preserve, London. The featured dancers are from Havana’s Ballet Lizt Alfonso. The lead girl in the video is Ana Karla SuÃ¡rez. The music video was shot in Dominican Republic. The video production in the Dominican Republic was produced by Aquiles Jimenez The video has been viewed 100 million times as of June 4, 2014.

The video starts with Descemer singing Bailando in the room with Enrique and Gente De Zona whilst Enrique performing some football skills. As the song starts Iglesias, Bueno and Gente D’ Zona walk the streets of the city, surrounded by working people and kids who juggle soccer balls. Enrique and Co. are then seen performing “Bailando” in a tunnel, running through a street market and a troop of flamenco dancers showing off their moves. Shortly after, Iglesias is seen to be seduced by a sexy brunette showing her best dance moves. The video ends with Enrique and Co. running back after they hear police sirens approaching them.

Billboard described the video as spectacular and mentioned that a young Cuban flamenco troupe swirling in red dresses meet up with street dancers with some mad soccer skills in one of the best choreographed encounters since the Sharks met the Jets. Huffington Post also mentioned that the video has a little football and a sensual dance.

The song first charted on the Spanish singles chart at number 6. In its third week, it topped the chart becoming his second Spanish language song to hit number 1 on the chart after “Loco”, both songs from his latest studio album Sex and Love.

The song also debuted at number 81 on the US Billboard Hot 100. The Spanish version of the song has peaked at number 53, making it Iglesias’ highest charting Spanish song on the chart, surpassing the peak of “Loco”.

The song became Enrique’s 26th number 1 on the Latin Airplay Chart, extending his lead of most number ones having double the number of number ones than second placed Ricky Martin (having 13 number 1 placed songs on the chart).