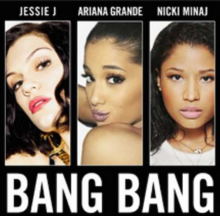 “Bang Bang” is a song by English singer-songwriter Jessie J, American singer Ariana Grande and American rapper Nicki Minaj. The song was released on July 29, 2014 through Lava Records and Republic Records, the label that houses all three artists, and serves as a joint single. The song is the lead single from Jessie J’s upcoming third studio album and will also be featured on Ariana Grande’s second studio album My Everything as a track on the deluxe edition of the album, set to be released August 25, 2014. Although set to be released on 29 July, the song was leaked a few hours earlier before its scheduled premiere.

Upon release, the song was critically acclaimed by music critics; who praised its soulful production and enticing vocals.

On July 9, 2014, Jessie J uploaded a 15-second snippet of the song on her Instagram profile. On July 23, 2014, another snippet of the song was uploaded to an Instagram profile, this time by the rapper Nicki Minaj. On July 27, Ariana Grande uploaded the third and final snippet on her Instagram account. Although scheduled to premiere on July 29th, the song was reportedly leaked a few hours before its release causing the song’s release to be rushed.

“Bang Bang” is an up-tempo soulful song, that features a “clap-heavy” production, built over “big bouncy beats and horn blasts.”

Both critics and audiences praised the song. Carolyn Menyes from Music Times called the song “[a] Hit of Summer 2014” and thought that “[the] song is is going straight to the top of the charts”. Zach Frydenlund from Complex praised Jessie J’s and Ariana’s vocals in the song but concentrated more on Nicki’s “catchy verse” stating that “it’s Nicki who really steals the show with her verse”. Jason Lipshutz from Billboard responded positively to the song saying that the song itself “[is] composed of piercing vocals courtesy of two contemporary crooners, as well as rapid-fire spitting from the hottest female MC on the planet, “Bang Bang” rests tidily upon the Ariana Grande assertion”. Vulture’s Lindsey Weber thought the song was “no Lady Marmalade” but praised it saying “it’s catchy enough to make a splash”.

Chris Martins from Spin, stated theat the song is “powerful”, and credits Minaj for the songs noteworthy energy. “It’s What makes the track so big? Well, um, ask Nicki Minaj.” He goes on to further praise Minaj’s performance on the song, affirming that “The “Anaconda”-taming MC rips a few mics on the loud and proud pop-soul song”.

On July 29, 2014 Jessie J performed an acoustic version of the song on the Elvis Duran and the Morning Show.