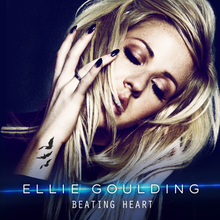 “Beating Heart” is a song recorded by English recording artist Ellie Goulding for the soundtrack to the film Divergent (2014). It will be released on 23 May 2014 as the second single from the album. On 24 February 2014, “Beating Heart” premiered on the Entertainment Weekly website, as well as on BBC Radio 1 as Zane Lowe’s Hottest Record. The following day, the track was made available for pre-order as part of the Divergent soundtrack album on iTunes in North America. A lyric video featuring scenes from the film was uploaded to Goulding’s official Vevo channel on 24 February 2014, while the official music video premiered on MTV on 11 March.

The music video for “Beating Heart” premiered on 11 March 2014 on MTV. The music video shows Goulding in her fear landscape. The video begins with Goulding standing in a dark room drinking the simulation serum like the serum in the story and sees herself in a simulation, where she is in a misty forest. She meets a mysterious boy in the forest and as she turns to walk away she is pulled closer to him. The simulation ends and Goulding is seen standing in the same dark room. Following the release of the video, an interview occurred live on MTV.com where Goulding, Shailene Woodley and Theo James discussed Divergent. The music video was made available to watch exclusively for 24 hours on MTV.com after the video premiered.

On March 28, 2014 the music video was uploaded to Goulding’s official Vevo account. The video differed slightly from the version that premiered on MTV. It featured scenes from the film and different shots of Goulding performing the song.