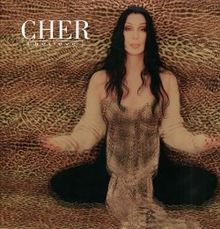 “Believe” is a song by American singer-actress Cher from her twenty-second album of the same name, Believe. It was first released on October 19, 1998 as the lead single from the album by Warner Bros.. It was written by Brian Higgins, Stuart McLennen, Paul Barry, Steven Torch, Matthew Gray, and Timothy Powell and produced by Mark Taylor and Brian Rawling. The song also appears on the greatest hits compilations The Greatest Hits (1999) and The Very Best of Cher (2003).

“Believe” is an upbeat dance-pop song that features Eurodance and house influences within its composition as well as several sound effects such as synthesizers and Auto-Tune. Lyrically, the song is about the personal empowerment and self-sufficiency after a painful break-up. Critically, “Believe” received praise from reviewers, being acclaimed for its club-friendly sound and Cher’s vocal performance, with some critics calling it a catchy song, and listed it as one of the singer’s musical highlights; they also noted the way in which Cher was able to re-invent herself and remain fresh and contemporary amidst the more teen pop-based music of the period. Some critical commentary has dismissed the piece for its high amount of Auto-tune. It won the Grammy Award for Best Dance Recording at the 42nd Grammy Awards and also received a nomination for Record of the Year. Commercially, the song remains one of the best-selling singles of all time, having sold 11 million copies worldwide, topping the charts in over 20 countries, including Australia, Canada, Germany, the United Kingdom and the United States; the latter in which she still holds the record for the oldest solo female act to have a number 1 hit on the Billboard Hot 100 chart, at the age of 52. It became the world’s best-selling single of 1998 and 1999 and the highest-selling single by a female artist of all time in the United Kingdom.

The music video for “Believe”, directed by Nigel Dick, showed Cher in a nightclub performing the song in two different sequences: one in which she is seen performing the song on stage and the other as a supernatural being locked in a cage. Cher has performed the song in every one of her tours and in several TV shows around the globe.

As released, the single incorporates the work of six different songwriters, two producers and executive producer Rob Dickins, the erstwhile chairman of Warner Bros, but according to Mark Taylor the creation of “Believe” was a “strange one.” Originally written by Brian Higgins, Matthew Gray, Stuart McLennen and Tim Powell and circulated on Warner as a demo for months, nobody wanted it. Mark Taylor said that “everyone loved the chorus but not the rest of the song; As we were already writing other songs for Cher, Rob asked us if we could sort it out. Two of our writers, Steve Torch and Paul Barry, got involved and eventually came up with a complete song that Rob and Cher were happy with.”

Once the demo version was agreed, Mark and Brian took over for the actual production, working at Dreamhouse; Mark said “We knew the rough direction to take, because Rob had said he wanted to make a Cher dance record. The hard part was trying to make one that wouldn’t alienate Cher’s existing fans.”

The entire track was assembled with Cubase VST on an iMac G3 computer, with other synthesizers, including a Clavia Nord Rack and an Oberheim Matrix 1000, while Cher’s vocals were recorded on three TASCAM DA88 digital audio recorders with a Neumann U67 vacuum tube-amplified microphone. The song was recorded approximately in ten days in Surrey, United Kingdom. Cher’s voice is altered by a pitch correction speed that is “set too fast for the audio that it is processing.” Producer Mark Taylor added the effect to Cher’s vocal simply as a kind of mischievous experiment. In interviews at the time, he claimed to be testing out his recently purchased DigiTech Talker. It later emerged that the effect was not created by a vocoder, but by using extreme (and then-unheard-of) settings on Antares Auto-Tune. Taylor said about the effect that “this was the most nerve-wracking part of the project, because I wasn’t sure what Cher would say when she heard what I’d done to her voice”, but that when she heard it she said, “It sounds great.” When her record company requested that the effect be removed, she responded, “Over my dead body!” After the massive success of the song, use of Auto-Tune became very popular and many other artists imitated this technique, and it would eventually become known as the “Cher effect”.

“Believe” is a dance-pop song. The song samples a synth sound from “Prologue” and “Epilogue” off ELO’s 1981 album Time at the beginning. It also includes a drum-sample of Daft Punk’s 1998 single Revolution 909.

Billboard gave the song a positive review, saying that the song is “the best darn thing that Cher has recorded in years”. Allmusic editor Michael Gallucci gave a lukewarm review, writing that the Believe album is an “endless, and personality-free, thump session”. Joe Viglione called this song “pop masterpiece, one of the few songs to be able to break through the impenetrable wall of late 1990’s fragmented radio to permeate the consciousness of the world at large.” Entertainment Weekly called this song “poptronica glaze, the soon-to-be club fave…” and called her voice “unmistakable.” Robert Christgau highlighted this song as the best song on Believe. Damon Albarn of the band Blur called the song “brilliant”.

It was voted as the world’s eighth favourite song in a poll released by BBC.

The song, recorded and released in 1998, peaked at number one in 23 countries worldwide. On January 12, 1999, it reached the Top 40 on the Billboard Hot 100 and reached number one on the chart on March 2, making Cher the oldest female artist (at the age of 52) to perform this feat. Cher also set the record for a solo artist with the longest span of time between number one hits. Her previous number one hit, “Dark Lady” had been in 1974. She also set a mark for longest gap between her first No. 1 song (“I Got You, Babe,” released in 1965 with her then-husband, the late Sonny Bono). It beat the record held by former Beatles lead guitarist, George Harrison (who first hit the top of the charts in 1964 with “I Want To Hold Your Hand” then took approximately 24 years before hitting No. 1 with “Got My Mind Set On You”). “Believe” also was ranked as the number-one song of 1999 by Billboard on both the Billboard Hot 100 and Hot Dance Club Play charts, and became the biggest single in her entire career.

In the United Kingdom, “Believe” spent seven weeks at number one on the UK Singles Chart, becoming Britain’s biggest-selling single of 1998. As of June 2013 “Believe” is still the best selling single by a female artist of all time there. According to Official Charts Company, the song has sold 1,790,000 copies in the UK as of March 2014.

The success of the song not only expanded through each country’s singles chart, but also most countries’ dance charts. In the United States “Believe” spent 23 weeks on the U.S. Hot Dance Club Play chart, five of those weeks at #1, and 22 weeks on the European Hot Dance Charts. “Believe” also set a record in 1999 after spending 21 weeks in the top spot of the Billboard Hot Dance Singles Sales chart, it was still in the top ten even one year after its entry on the chart.

On 13 October 2008, the song was voted #10 on Australian VH1’s Top 10 Number One Pop Songs countdown. “Believe” was nominated for Record of the Year and Best Dance Recording at 42nd Grammy Awards, the latter of which it won.

The official music video for “Believe”, directed by Nigel Dick, features Cher in a nightclub in a double role as singer on stage, and wears a glowy headdress and as supernatural being in a cage (with auto-tuned voice), surrounded by many people to whom she is giving advice. The video includes a woman who is in club and looking for her ex-boyfriend and broken hearted and feels that she cannot go on when she sees her ex-boyfriend with a new a girlfriend. The version on The Very Best of Cher: The Video Hits Collection is slightly different from the previous version (the version that is also included on the Mallay Believe Bonus VCD) with additional scenes towards the end that were not in the original video. There are also two ‘rough’ versions of the video as the song was released in The UK and Europe before a video was completed. The first is a compilation of scenes from the videos of Cher’s previous singles “One by One” and “Walkin’ in Memphis” and the second includes a brief scene of the Believe video where Cher sings the chorus while the rest of the video is composed of scenes from “One by One”.

Three official remix videos exist for this song. Two of the remix videos were created by Dan-O-Rama in 1999. Both follow different concepts from the original unmixed video. Instead of showing the significance of the lyrics the videos mostly show Cher with different colored backgrounds and people dancing. The two remixes used for these videos were the Almighty Definitive Mix and the Club 69 Phunk Club Mix. The third video entitled Wayne G. Remix was released by Warner Bros. and the concept is similar to the Club 69 Phunk Club Mix video.

Cher performed the song during the Do You Believe? Tour, The Farewell Tour, Cher at the Colosseum and the Dressed to Kill Tour. While she would lip-sync the entire song on various television programs, she would only lip-sync the synthesized verses when performing on her Believe and Farewell tours, the Colosseum shows and on the 2002 edition of VH1 Divas Live. Since 1999, the song has been the encore to all of Cher’s concerts.