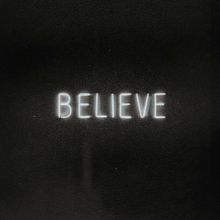 “Believe” is a song by British folk rock band Mumford & Sons. It was written by band members Ted Dwane, Ben Lovett and Winston Marshall. The song was released on 9 March 2015, serving as the lead single from the band’s third studio album, Wilder Mind (2015).

After attending a friend’s wedding in Texas, USA, the band stayed on at a ranch for a week ranch to write songs. Mumford, the band’s usual songwriter left a day early, and by the time the band met up again in London, Dwane, Lovett and Marshall had written the song “Believe”. The band then built the song up together, which was eventually recorded and produced by James Ford. The song has a length of 3 minutes and 41 seconds. The song, which has rock music influences and was inspired by bands such as The National, is considered a departure from the folk rock sound Mumford & Sons had become known for on their albums Sigh No More and Babel.

“Believe” was first aired on BBC Radio 1 on 9 March 2015 and was subsequently made available to download Worldwide.

The song received critical acclaim upon release, with music critics complimenting the band’s change of sound.

NME gave the song a very positive review, saying “‘Believe’ proves that the Mumfords know exactly what they’re doing. Twinkling synths herald its arrival, as Marcus softly deals with weighty matters of the heart. “I don’t even know if I believe/everything you’re trying to say to me,• he croons, as the song keeps relatively light on its feet over its first half, as languid keys do calmly flirt with the idea of becoming a string section, but then think better of it. It’s all change at two minute mark though, when Winston Marshall, finally free from the shackles of the banjo, lets rip a piercing electric guitar wail as the song rockets skywards. From here on in its a steady race to epic heights. “Say something like you love me,” implores Marcus against increased riffage courtesy of Winston, in what’s easily the first stadium-worthy song of 2015”.[1]

In a positive review, The Independent commented on the lack of banjo in the song, “Synthetic sounds can sometimes create a flatness to a tune, but the Mumfords have managed to use them to create a sense of power and energy that’s hard to resist. The banjo is dead, long live electric”.

“Believe” has currently peaked at number 1 on the US iTunes chart and number 5 on the UK iTunes chart.

An ‘Official Audio’ video was uploaded to the band’s YouTube channel after the airing. An official music video is expected to follow.

Mumford & Sons made their live return at the 375 capacity Oslo, Hackney on 8 March 2015 with an intimate show for family and friends. The band played again to fans on the following two nights, debuting songs from Wilder Mind, including “Believe”.