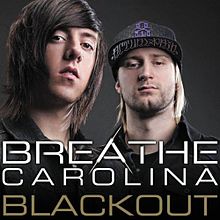 “Blackout” is a song by American electronic rock duo Breathe Carolina. It is the lead single from their third studio album Hell Is What You Make It. It was written by David Schmitt, Kyle Even, Eric Armenta, Joshua Aragon, and Luis Bonet, whilst production was handled by Ian Kirkpatrick. Recorded between late 2010 and early 2011, it was one of the first tracks recorded for the album. On December 22, 2010, a snippet of the song was previewed in a YouTube video by Fearless Records. It premiered via MTV Buzzworthy on June 13, 2011, while it was available for digital download the following day.

The song received generally positive reviews from music critics, with some commending its catchiness. The song has since become the duo’s most successful single to date, peaking within the charts of Canada, New Zealand, Scotland, the United Kingdom and United States. It was also certified Platinum by the Recording Industry Association of America (RIAA), selling more than 1 million copies. A music video directed by MOTIONarmy premiered via Vevo on September 20, 2011. A remix EP titled Blackout: The Remixes EP was also released on September 27, 2011, featuring remixes done by Big Chocolate, Wideboys, Tommy Noble and Tek-One. The song has since been performed on Jimmy Kimmel Live! as well as The Daily Habit.

The song was written by David Schmitt, Kyle Even, Eric Armenta, Joshua Aragon, Luis Bonet, and Simon Wilcox while production was handled by Ian Kirkpatrick, and was the first song written for the album. While describing the writing process of the song, Even said the song is “one song that we created. We’re very eclectic, and we definitely do whatever we want.” It was recorded in Los Angeles, California in 2010. On December 22, 2010, a snippet of the song was previewed by Fearless Records, however, the name of the song was not given. It premiered via MTV Buzzworthy on June 13, 2011, while being available for digital download the following day.

Musically, “Blackout” is a synthpop and dance-pop song that also blends house, Italo disco and electro genres and features a “chugging bassline” and “punchy beats”, while Schmitt’s vocals have been described as “nasal”. The song has also been said to be reminiscent of pop music from the late-1980s. It has also been described as having heavy influences of pop punk, and has been compared to the music of Cobra Starship. Lyrically, the song mentions references to alcohol intoxication and partying, singing “I’m only getting started/I won’t blackout” throughout the chorus.

The music video for the song premiered on September 20, 2011 the duo’s official VEVO channel via YouTube. It was shot during the summer of 2011 in Los Angeles, California. It includes shots of the duo performing live with their band whilst also including sequences of the group “partying” and “getting into trouble”. It has since ranked on MTV’s 10 On Top list.

A lyric video was also uploaded onto the duo’s official YouTube channel and has since garnered more than 11 million views.

The duo performed “Blackout” on Jimmy Kimmel Live! on June 16, 2011 in their first televised performance ever. The duo also performed it on The Daily Habit.

The song was featured during the 2011 Spike Video Game Awards when Batman: Arkham City received the award for “Best Action Adventure” game. It was also featured on a promo for WWE’s Monday Night Raw on December 12, 2011.

It will be featured in the Australian version of FIFA Street.