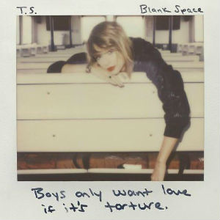 “Blank Space” is a song recorded by American singer-songwriter Taylor Swift for her fifth studio album, 1989 (2014). It was written by Swift, Max Martin and Shellback. The song was released to contemporary hit radio by Big Machine Records on November 10, 2014 as the album’s second single, after “Shake It Off”.

“Blank Space” is an electropop song with influences of minimal pop.[2] Many critics compared the song to the works of fellow singer-songwriter Lorde. It makes fun of Swift’s recent exposure in the media about her dating life, portraying “an overly attached man-eater who dates for songwriting material” as herself.[3] The song was written by Swift along with Martin and Shellback, and produced by the latter two. Swift’s vocals range from A3 to C5, and is in the key of F major.

The accompanying music video was directed by Joseph Kahn. Kahn said that Swift approached him with the idea for the treatment, saying she was all too aware of the jokes made about all of her ex boyfriends and how she likes to include them in her songwriting. She told him that she wanted to address the general thought of her in the clip in a fun way by playing a crazy villain.[5] It was filmed at September in Oheka Castle in Huntington, New York[6]

Sean O’Pry is Swift’s love interest in the video.

The video accidentally leaked on Yahoo! on November 10. Kahn tweeted about the accidental early release, “I’ll link video later when I think it’s clear. I think it may be a mistake on yahoo’s part - they may have released it early by accident.”[7] To which he later added, “Yup. Yahoo effed up. Wait to see the Blank Space video. Let Taylor introduce it herself. It’ll be worth it :)”[8] The video was later removed and subsequently got uploaded on Swift’s official Vevo account the same day.

The video depicts Swift as a ‘serial-dater’, a woman obsessed with love though she is never able to hold a man down. The music video opens with Swift’s love interest turning up at her castle and Swift is seen cradling a white cat, guarded by two white horses. Swift and her love interest have dinner together before engaging in various recreational activities such as ballroom dancing, cycling and painting. They are then seen walking three Doberman Pinschers and riding the two white horses from the beginning of the video before playing a game of chase through the gardens. Swift hangs up the portrait of her new lover in a hallway filled with defaced portraits of ex-lovers, admiring its beauty.

The pair go out to a picnic where it is apparent to Swift that her lover is texting another woman. She becomes enraged and the couple fight, with Swift accusing her lover of cheating on her before promptly throwing objects from the room at him. Swift is then shown sitting alone by a fireplace, with only a deer for company, her face streaked with mascara and looking deranged as she sings. She tosses her lover’s phone into a fountain, much to his annoyance. She maimes and defaces the original portrait of her lover, and destroying his belongings. As her lover surveys the hallway of portraits of defaced ex-lovers, it becomes apparent to him that he is not the first that Swift has treated in such a way. However, he is too late to stop her from breaking his car with a golf club as well as destroying a heart-shaped cake. Swift continues attacking the car and the lover, who flees from the castle driving the destroyed vehicle. The video ends with another identical car coming up to Swift, with another man getting down from it. They then give each other a look as Swift smiles sinisterily before the screen cuts to black.

The song topped the Hot Digital Songs charts with sales of 155,000 copies in its first week, making it the third song from 1989 to reach number 1 on the Billboard Digital Chart.[9][10] The song debuted at number 18 on the Billboard Hot 100

Swift will perform the song live for the first time at the 2014 American Music Awards.