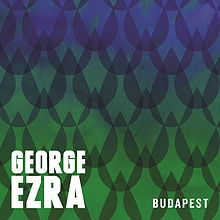 “Budapest” is a single by British singer-songwriter George Ezra, from his debut studio album, Wanted on Voyage (2014). It was released as the album’s lead single on 13 December 2013 in Italy, and on 13 June 2014 in the United Kingdom. The song was co-written by Ezra with Joel Pott and produced by Cam Blackwood.

The single was released on Columbia Records and distributed by Sony Music, and peaked at number three on the UK Singles Chart. “Budapest” has also been a major hit for Ezra in Austria and New Zealand, topping the charts in both countries, while additionally reaching the top ten in multiple other countries, including Australia, Germany, Ireland, Italy, Netherlands, and Switzerland.

An official music video for “Budapest” was first released onto YouTube on 21 April 2014 at a total length of three minutes and thirty-six seconds. It consists of a large crowd of people all with different styles and accessories all standing motionless together in a tight-knit crowd, occasionally being intercut with footage of one of them doing something minor like shifting slightly where they stand, one of them sneezing gaining the attention of everyone around and George playing his guitar and singing to the camera with a smile. As the video goes on, the people start to move and interact by passing their accessories around, a group of 3 young men having one of them bite into a very spicy chilli pepper, a hen party attendee in a sash and tiara talking on the phone to someone, the crowd looking up together and putting on 3-D glasses, all intercut with George crowd-surfing them and playing and singing to the camera again.

As the video starts to come to an end, George begins to crowd-surf standing up instead, taking off his guitar and passing it down to join all the other accessories being passed around, this time with people interacting more and dancing together. The video ending with George singing with his guitar standing in the crowd which is now motionless again, when the song ends he simply stops and becomes motionless too. In a small epilogue, some members of the crowd are all on the floor silently cheering, laughing and clapping together.