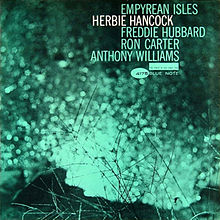 “Cantaloupe Island” is a jazz standard composed by Herbie Hancock and recorded for his 1964 album Empyrean Isles during his early years as one of the members of Miles Davis’ 1960s quintet. The musicians for the original 1964 recording were: Hancock (piano), Freddie Hubbard (cornet), Ron Carter (bass) and Tony Williams (drums).

Empyrean Isles is the fourth album by American jazz pianist Herbie Hancock, recorded on June 17, 1964 for Blue Note Records. It features the debut of two of his most popular compositions, “One Finger Snap” and “Cantaloupe Island”.

From the original liner notes by Duke Pearson: “This is a quartet album for trumpet and rhythm section. In this circumstance, a problem was created for the composer-arranger, in that the lack of another instrument supporting the lower, richer register, such as a tenor saxophone, might result in a shallow sound. With this problem in mind, Herbie Hancock, who composed and arranged all the tunes, wrote them to sound more like improvisations than ensemble melodies, so that the warmth and fullness of a supporting melody would not be missed. Free sketches were written in such a way that each instrument is allowed great flexibility of interpretation. In many cases, no melodic line was laid out over the chords nor atonal clusters written, so that the trumpeter could supply any melody he wished.”

From the 1999 reissue liner notes by Bob Blumenthal: “If someone had ordered up a program that explored four distinct areas of jazz expression with equal brilliance, they could not have done better than Empyrean Isles. It is as if Hancock had set out to present ‘changes,’ modal, funk and free playing and delivered each at its apex.”

The album was recorded by Rudy Van Gelder.