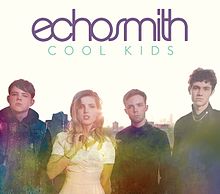 “Cool Kids” is a song by American indie pop band Echosmith from their 2013 debut studio album Talking Dreams. The song was originally released on October 8, 2013 as the iTunes Store Single of the Week and officially impacted United States radio the following year. The song has become a sleeper hit, peaking at number 16 on the Billboard Hot 100 and receiving airplay on US modern rock, hot adult contemporary, and contemporary hit radio stations. “Cool Kids” has also done well internationally, breaking into the top 10 of the Australian music charts and peaking at number eight.

The song tells the story of a boy and girl who just want to be noticed. “This cry to be like the cool kids… it’s something that everyone kind of goes through whether you want to act like it or not,” Jamie explained to Radio.com. “There’s always somebody out there that you kind of wish, ‘If only I could do this, or do that.’ I think that’s why it connects with people so well.”

The song was originally recorded for their debut EP Summer Sampler which was released 31 May 2013. The song was then officially released as a single of their debut album Talking Dreams. The song would make an appear as an acoustic version on their second EP Acoustic Dreams which was announced after their “Cool Kids” music video received one million views. “Cool Kids” was written by Echosmith, Jeffery David, and Jesiah Dzwonek.

The official music video was released on June 21, 2013 on their official YouTube channel. The video was filmed in Los Angeles, CA and was directed by Gus Black. After receiving one million views on their video, Echosmith released an acoustic version of the song.

Patrick Griffin of Sound and Motion Magazine gave a positive review, saying “It’s a breezy effervescent song about this teens, a boy and a girl respectively who are feeling quite insecure and just long to fit into the ‘cool’ crowd. The track is very infectious the synth melody and light strummed guitars just fill out the nice atmosphere of the track well. Sydney Sierota’s wispy vocals gives the track a kind of whimsical feel as the track sparks feelings of a more innocent time when fitting in was something that actually mattered. Sure the lyrics aren’t too thought provoking but this track is just very catchy and that’s cause enough to give this track a listen especially if you’re into indie pop.”

Daniel Bromfield of E Daily Emerald gave a negative review saying, “The album’s biggest lyrical tragedy would have to be ‘Cool Kids,’ which might have been the album’s best song if not for its cringe-worthy chorus of ‘I wish that I could be like the cool kids/Because all the cool kids seem to fit in.’ In addition to giving Snoop Lion’s ‘Take care of mother earth because she be the planet’ a run for its money for the year’s most redundant couplet, it’s a terribly ironic line. Echosmith has already fit in. But the cool kids are the ones that came before them, and Echosmith merely follow in their wake, trying to look and talk and think exactly like them. They only fit in because it’s what everyone else in their social current does”.

Markos Papadatos of Digital Journal noted Sydney’s lead vocals are lilting and reminiscent of Taylor Swift and Ellie Goulding, while her brother, Jamie, delivers on guitar and brother, Noah, rocks the bass, both accompanying her on back vocals. Papadatos noted Graham’s drum playing is addicting, which enhances the song sonically. The critic also mentioned Echosmith deserves praise for their catchy melodies and distinct sound. Cool Kids has become a summer anthem for the group, giving the song a 4.5 out of 5 stars.