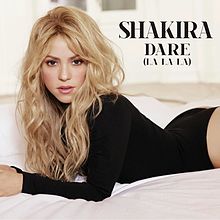 “Dare (La La La)” is a song recorded by Colombian singer-songwriter Shakira from her tenth studio album Shakira (2014). The song was co-written by Shakira, Jay Singh, Dr. Luke, Mathieu Jomphe-Lepine, Max Martin, Cirkut, Raelene Arreguin, and John J. Conte, Jr. whilst the production was handled by Dr. Luke, Shakira, J2, Cirkut and Billboard. It was released to contemporary hit radio in Italy on March 28, 2014 as the second international single (and third overall) from Shakira.

Background
After the success of her ninth studio album, Sale el Sol, in 2010, Shakira revealed in November 2011, “I’ve begun to explore in the recording studio whenever I have time in Barcelona and here in Miami. I’m working with different producers and DJs, and I try to feed off from that and find new sources of inspiration and new musical motivation. I’m anxious to return to the studio. My body is asking for it.” In 2012, it was reported that Shakira was shooting the video for the tentative-first single “Truth or Dare” in Lisboa, Portugal. However, due to Shakira’s pregnancy, the song was not released. Later, in March 2014, Shakira explained to Billboard that, “It’s been two-and-a-half years of making songs, trashing them, doing them again, doing eight versions of each song, having a baby, doing “The Voice,” coming back to the studio, reconnecting with my songs.”
In December 2013, Sony Music Entertainment reported that Shakira’s new single would be released in January 2014, and that it was supposed to be a duet with Barbadian recording artist Rihanna. In January 13, 2014, “Can’t Remember to Forget You” was released and indeed features Rihanna, which was followed by the release of the second single “Empire”. “Medicine” was released to country radio as a US-only single on 25 March 2014. Followed by the release of “Dare (La La La)” serving as the second international single and officially impacting radio stations in Italy on March 28, 2014.

Composition
“Dare (La La La)”, is an uptempo dance track that contains Brazilian beats and takes influence from electronica, with a Spanish version of the song also recorded for the album.

World Cup version
A re-worked version of the song entitled “La La La (Brasil 2014)” is included on the Latin American, Spanish, and international deluxe editions of the album and features new lyrics for the 2014 World Cup. It also has Spanish version of the song also recorded for the album.

Music videos
The music videos for “Dare (La La La)” and “La La La” (Spanish version) were premiered on May 7, 2014 via Shakira’s VEVO channel on Youtube. A portion of the recording of the chorus part video was leaked in mid-2012, proving the video was recorded before Shakira got pregnant, and a leak of nearly half the song followed. The videos were recorded in Lisbon, Portugal