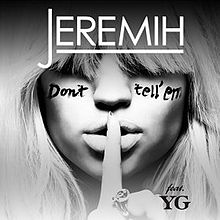 “Don’t Tell ’Em” is a song by American recording artist Jeremih from his upcoming third studio album, Late Nights: The Album. It features American recording artist YG, and was released as the second single from the album. The song was written by Jeremih and Mick Schultz and produced by Mick Schultz and DJ Mustard. The song’s lyrics uses quotes from Snap!’s 1992 single “Rhythm Is a Dancer.”