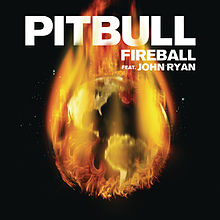 “Fireball” is a song by Pitbull featuring American singer, songwriter and producer John Ryan. It was released on July 23, 2014 as the first release from Pitbull’s upcoming 2014 album Globalization.

According to Variety, the music video for the song will include digital mashup with internet stars Jenna Marbles (who has a great following on her YouTube comedy channel and hosts YouTube 15 weekly program), Bart Baker (producer of popular music parodies) and Brittany Furlan, Vine star signed with Endemol Beyond USA. All three are slated to appear on the “Fireball” official video. Pitbull’s collaboration with Marbles, Baker, and Furlan was brokered by Endemol Beyond USA.