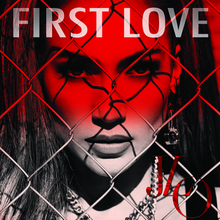 “First Love” is a song recorded by American entertainer Jennifer Lopez for her eighth studio album, A.K.A. (2014). It was written by Savan Kotecha and Ilya Salmanzadeh, and produced by the latter alongside Max Martin. The song was released as the album’s second single on May 1, 2014. The music video for “First Love” was released on May 29, 2014. It was directed by Anthony Mandler.

Background and release
While taking a break in between recording sessions for A.K.A., Lopez had a discussion with Cory Rooney, Max Martin, and Savan Kotecha about relationships. They talked about “how relationships can be difficult and you have to work at them. And how, when you finally do find that person you wish you had found them years ago.” A couple of days later, Martin and Kotecha called Lopez and told her that they came up with a song based on the conversation they had. According to Lopez: “I was on the set of Idol, doing Hollywood Week and they wanted to come over and play it for me, they were so excited. They came over at lunch time, to my small dressing room backstage at Idol to play this song and I just loved it. It captured this great feeling in a simple way. I feel like the best songs are like that. It was pretty exciting, we recorded it in the next couple of days.”
“First Love” was previewed during a six-song listening party of Lopez’s upcoming eighth studio album on April 25, 2014. During the event, she also revealed that the song would serve as the album’s second single. Of Martin, Lopez said: “He’s a super producer, maker of great pop hits. I’ve always wanted to work with him but our paths [hadn’t] crossed. I sought him out.” The artwork for the single was unveiled on April 27. It features Lopez standing behind a chain-link fence. “First Love” was leaked online on April 30.

Music and lyrics
“First Love” is an uptempo pop song, that mixes an electropop beat with “hard-hitting percussion” and “big drums”. The song runs for a duration of three minutes and thirty-five seconds (3:35).Â In the beginning, she sings: “And I wasn’t looking for someone new / Til you came down / Giving me the best the time I’ve had.” “I wish you were my first love / ’Cos if you were my first / Baby there wouldn’t have been no second, third or fourth love,” she sings.
Ziwei of Spin or Bin Music wrote the song is reminiscent of her previous singles “If You Had My Love” (1999) and “Love Don’t Cost a Thing” (2001). Mike Wass of Idolator remarked that the song “even [has] a splash of 2000 classic ‘Waiting for Tonight’ about the serotonin-raising chorus”. Jeff Benjamin of Fuse TV found the song to be reminiscent of her song “(What Is) Love?” (2011).

Critical reception
The song received generally positive reviews from music critics. Jeff Benjamin of Fuse TV wrote that, “J.Lo successfully straddles the line between pop and hip-hop on this song, as she always does.” Mike Wass of Idolator agreed, calling it “an adorable pure-pop explosion that expertly straddles the divide between J.Lo’s urban roots and much-loved dance moments.” Wass also named it “irresistible” and wrote that the song “lifts the bar for high-quality pop even higher on new single.” Ziwei of Spin or Bin Music wrote the song is “a very welcomed change” after “I Luh Ya Papi”, which he described as “the song that almost singlehandedly destroyed the English language.”