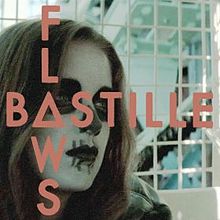 “Flaws” is a song by British band Bastille. It is the third single from their debut studio album Bad Blood. The song was the band’s debut single; it was first released in 2011 through the independent label Young and Lost Club as a double A-side 7-inch single with their song “Icarus”. The single was later re-released through Virgin Records as a digital download on 21 October 2012, featuring remixes and new B-side track “Durban Skies”, peaking at number 21 on the UK Singles Chart on this occasion. “Flaws” was released for a third time on 3 March 2014, but did not improve upon its previous peak.

“Flaws” makes extensive use of compound quadruple meter (12/8 time), which sets it apart from a lot of other contemporary Western pop music.

Two music videos have been produced. The first accompanied the 2012 release of “Flaws” and was first released onto YouTube on 12 September 2012 at a total length of three minutes and forty-one seconds. A second video released in 2014 for the single’s re-release documents the band’s experiences of 2013 via a video montage of several of their performances.