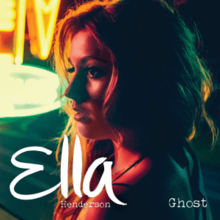 “Ghost” is the debut single by British singer-songwriter Ella Henderson. It was released on 8 June 2014 as the lead single from her debut studio album, Chapter One (2014). Henderson co-wrote the song with its producers, Ryan Tedder and Noel Zancanella.

The music video was filmed in New Orleans, Louisiana in March 2014. The song entered at number one on the UK Singles Chart, as well as in the Republic of Ireland. It has also peaked within the top ten of the charts in Australia, Belgium, Germany, Hungary and New Zealand. Since its release, it has sold over 750,000 copies in the UK and gone Platinum. It was also the sixth best-selling single of 2014 in the UK.

On 18 November 2012, Henderson finished in sixth place on ninth series The X Factor, despite being the favourite to win. On 15 December, whilst being interviewed on The Saturday Night Show in Ireland, she revealed that she had signed a record deal with Sony Music. On 22 January 2013, Henderson confirmed she had signed to Simon Cowell’s record label Syco Music. Regarding her decision to sign with Syco, Henderson said, “The most important thing I was looking for was to be involved creatively, and which label presents me with the best team to bring the best out of me. The fact that Cowell is letting me be involved creatively is overwhelming.”

“Ghost” was co-written by Henderson, OneRepublic frontman Ryan Tedder, and record producer Noel Zancanella, and produced by Tedder and Zancanella. The song was recorded at Tedder’s recording studio in Denver by Smith Carlson on 12 January 2014, Henderson’s 18th birthday. In March 2014, Henderson announced that it would be her debut single, and released on 8 June 2014. The song received its debut radio airplay on Capital FM on 10 May 2014.

“The end result, Ella’s first single ‘Ghost’, would make a worthy winner’s launch, let alone someone who fell victim to the mid-series shock elimination. “I keep going to the river to pray/ ’Cos I need something that can wash out the pain,” Henderson professes over stomping Americana-folk beats and taut guitar twangs, falling somewhere between the rootsy heart of Adele and the pop sensibility of Leona Lewis. It’s dark, it’s brooding and it’s full of pain, but most importantly for Ella’s concerns, it’s an unforgettable debut.” 5/5 stars

“Ghost” was commercially successful, entering at number one on the UK Singles Chart on 15 June, selling 132,000 copies in its first week on sale. The song remained number one in the UK for a second week, outselling 5 Seconds of Summer’s “Don’t Stop” by 3,000 copies. The single has been certified Platinum by the BPI for sales of over 600,000 copies in the UK. It was the sixth best-selling song of 2014 in the UK, selling 750,000 copies.

In the Republic of Ireland, the song debuted at the top of the Irish Singles Chart. It has also charted in the top 10 of the singles charts in Australia, Belgium, Germany, Hungary and New Zealand.

Another video was released for the Switch remix of the song on 14 April 2014. This video, directed by Jem Talbot, features a young woman (played by Samara Zwain) exploring an empty house and reminiscing on a relationship.

It has also been performed on The Ellen DeGeneres Show, and The Voice in the US and Germany. The song was covered three times by contestants on her origin show, The X Factor, in series 11, firstly by Only The Young at judges’ house’s, next by Paul Akister in the first live performance by a contestant in that series, and then by Andrea Faustini, who sang the song with Henderson in the celebrity duets round of the final.

Hala: This is my favorite song.