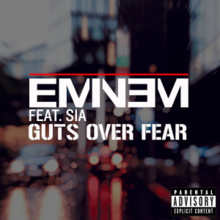 “Guts Over Fear” is a single by American rapper Eminem, featuring Australian singer Sia from his compilation album Shady XV, released on November 24, 2014.

Previews of the song premiered in trailers for the film, The Equalizer starring Denzel Washington. The song was officially released to iTunes on August 25, 2014, the same day Eminem announced his plans to release an album later that year.

The song is a synth heavy showcasing Sia’s forceful voice singing a chorus about how she now feels emboldened in the face of adversity, as the rapper parses his various insecurities and his place in rap. The song’s subject matter regards Eminem and his struggles as an artist, and touches up on moments of his career. Australian singer Sia provides the chorus, making this the second time the two artists collaborated, first being “Beautiful Pain” off of the deluxe version of The Marshall Mathers LP 2.

Eminem posted a picture on Instagram to serve as a sneak peek for the upcoming music video. The video premiered on November 24, via VEVO, was filmed in Detroit, Michigan, directed by Syndrome and starred Alexander Wraith and a cycle 21 of America’s Next Top Model contestant, Chantelle Brown-Young.

Harper: This is my favorite song.