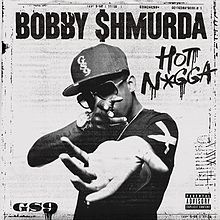 “Hot Nigga” (clean version titled as “Hot Boy”) is a song by American recording artist Bobby Shmurda. It was released for digital download on July 25, 2014 by Epic Records and GS9. It features the beat from Lloyd Banks’ song “Jackpot”, produced by Jahlil Beats. The music video contains a choreography that was later named the “Shmoney dance”. The song and the video became popular in 2014 among Vine users, which lead to the “Shmoney Dance” meme. Additionally, several unofficial remixes by various rappers have been made. The song has peaked at No. 18 on the Billboard Hot 100.

The official music video was uploaded to Shmurda’s VEVO account on August 1, 2014. The video was made in the summer of 2013.

Freestyles by various rappers have since then been released among which Juicy J, French Montana, Lil Kim, Gunplay, T.I., and Jeezy.

Use in popular culture

The song and the video became popular in 2014 among Vine users, which lead to the “Shmoney Dance” meme. In July 2014, Beyoncé did the dance move on a venue of her On the Run Tour. The move was also performed by NFL receiver Brandon Gibson after a touchdown.

Drake used the song while hosting the 2014 ESPY Awards.