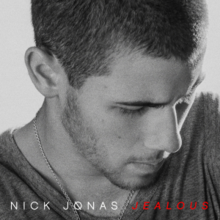 “Jealous” is a song performed by American recording artist Nick Jonas for his eponymous second studio album. It was released on September 8, 2014, by Island Records as the second single from the record. It was written by Jonas, Simon Wilcox, and Nolan Lambroza; production was helmed by the latter. “Jealous” peaked at No. 23 on the US Billboard Hot 100, consequently becoming Jonas’ highest charting single in the United States to date.

On August 22, 2013 in an interview with E! News, Jonas confirmed that his second single would be titled “Jealous”. He revealed lyrically the song was about the feeling of threat men experience when another man looks or interacts with their girlfriend. In a later interview with Just Jared, Jonas explained: “[It’s] just that thing of puffing your chest up every once in a while…You feel like you’re ready to go.” He also revealed that the feeling he had was elated filming the TV series ‘Kingdom’. “At the time I wrote and recorded it, I was in the middle of all the training for ‘Kingdom,’ so I was really sort of hyped up on testosterone.”

Jonas told Billboard magazine that the song has a “Lionel Richie vibe.”

Jonas played a 30 second preview of “Jealous” during an interview on the nationally syndicated radio program On Air with Ryan Seacrest on September 4, 2014. It was announced on September 6, 2014 that fans could pre-order his upcoming album to get early access to the tour ticket sale for Jonas’s upcoming club tour. Fans who pre-ordered the album also received a digital download of “Jealous” upon its release on September 8, 2014.

Talking about the video, Jonas said: “The video is basically a trip into the mind of Nick Jonas by way of stream of consciousness. So the director, Peter, he said ‘I think if you asked someone right now, ‘Who is Nick Jonas?’ I think you’d get a million different answers. After having the chance to get to know you, I feel like none of them would really be right because you are so different than the public perception. So let’s get inside your mind because this song is very personal even though it’s fun. It’s kind of a dance song in a way. But let’s dig a little deeper and see what it means to you.’ So the video is really layered, like his art. You can see he layers a bunch of different news clippings and articles and says something greater over top of it. The video is the same way. The real message is that jealousy is something we all feel from all different walks of life, whether it’s about romance or love or family or whatever it is — insecurities. It touches on all that and also has sort of a fun through line with me and Olivia is actually in the video as well.”

On August 24, 2014 it was announced that the music video would be released on September 16 and is directed by Peter Tunney. Jonas’s girlfriend Olivia Culpo makes a cameo in the video.

On November 9th, 2014 Nick released a new music video for his single Jealous. this video show him sing the song with a gospel choir.

A remix of “Jealous” produced by Sir Nolan was released on November 5, 2014 by Jonas’ record label Island Records. The remix received generally favorable reviews from music critics, who felt that it complimented the album version.

On November 4, Jonas held a Q&A online were he announced that Jealous would get an official remix featuring American singer Tinashe. He also released a 42 second snippet of the remix and announced that it will be released on November 5. On November 5, an official remix featuring Tinashe was released online. For the remix, the song had to undergo some minor changes, with the inclusion of some swear words.

Justin Davis of Complex wrote that Tinashe added her own female touch to the bouncy song, giving the other side of the story for Jonas’ ode to being protective over his romantic conquests by sympathizing with her own admission of jealousy. The song remains just as catchy as the original, with Jonas’ macho verses remaining intact, but the addition of Tinashe gives the song new life.

Radio.com columnist Courtney E. Smith wrote that the Hip-hop’s up-and-coming it girl puts an extra sexy spin on the former Jonas Brother’s angsty single, adding herself to the chorus and turning the music’s Prince factor up to 10.

On November 5, Jonas performed the remix of the song live for the first time with Tinashe at 106 & Park. That same day she joined him on stage at his concert in The Music Hall of Williamsburg.