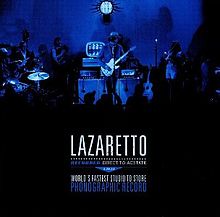 “Lazaretto” is the first single from Jack White’s second solo album, Lazaretto. The live version of the song was recorded, pressed and released on the same day (19 April 2014). On the B-side was a cover of Elvis Presley’s song “Power of My Love”.

By recording, pressing and releasing the live version of “Lazaretto” in less than four hours, Jack White broke the previous Guinness World Record set by Swiss polka trio Vollgas Kompanie, who issued their album Live on August 16th, 2008, a day after they recorded it. There is a hidden message alongside matrix numbers in the runout areas on both sides of the “Lazaretto” “world’s fastest record” vinyl: side A “Guinness”, side B “Can Kiss My…”

The studio version of the song was released on April 21 on YouTube, and on April 22 the single was available for purchase digitally and as an instant download with all iTunes Lazaretto album pre-orders.