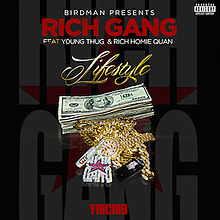 “Lifestyle” is a song by American hip hop group Rich Gang, featuring rappers Young Thug and Rich Homie Quan. The song, produced by London on da Track, was released on June 5, 2014 as the first single from the upcoming untitled second Rich Gang album.

“I would rather you listen to my song a hundred times than listen to it one time and know it. People can listen to ‘Lifestyle’ now and hear something new, and say ‘Whoa— that’s a good metaphor.’ That’s what I like the most about my music. It’s hard to understand, but when you do understand, you’re sold.”
—Young Thug

The song premiered in May 2014, but as the lead single from the upcoming second album of Rich Gang was released on June 5, 2014. There has been speculation on the homosexual undertones of the song in Young Thug verse, “I won’t do nothin’ with the bitch, she can’t even get me hard / Somethin’ wrong with the pussy / Even though I ain’t gon’ hit it, I’ma still make sure that she gushy” This suggest his dislike for females in favor of same-sex relationships.

A music video for “Lifestyle”, directed by Be El Be, was released on June 30, 2014. The video featured Birdman, Young Thug, Rich Homie and others enjoying their time with hoes on a plane and yacht.

In August 2014, American rapper Lil Boosie released his remix of “Lifestyle”. Another remix of the song by Atlanta-based rapper Waka Flocka Flame was released in October 2014.

Saanvi: This is my favorite song.