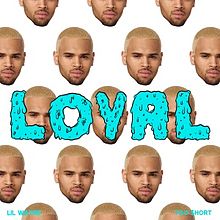 “Loyal” is a song by American singer Chris Brown, released as the fourth single from his upcoming sixth studio album X (2014). The song was produced by Nic Nac and features guest appearances from fellow rapper Lil Wayne and rappers French Montana, Too Short or Tyga, depending on the version of the song. “Loyal” has since peaked at number nine on the US Billboard Hot 100.

Background
On December 16, 2013, the audio to the song was premiered online. The song was originally released in two versions, an East Coast version and a West Coast version. Both versions feature Chris Brown and Lil Wayne, while the East Coast version features French Montana and the West Coast version features Too Short. Then on December 19, both versions of the song were released as digital downloads. It would be the fourth single released from his sixth studio album X.
The overall theme of the song is about unfaithful women. It was reported that Brown makes references at ex-girlfriend Rihanna in the song, as he sings about a girl not being loyal in a relationship, a theme that he also rapped about on DJ Khaled’s “I’m Still”, which was also thought to be aimed at Rihanna.

Music video
In February 2014, the music video for “Loyal” was shot at Universal City Walk with Lil Wayne and Tyga. On March 21, 2014, Brown announced that the music video would be released on March 24, 2014. Then as planned, it was released that day with a verse from rapper Tyga replacing French Montana or Too Short on the song. Singers Usher, Trey Songz and Ty Dolla Sign make cameo appearances in the video.