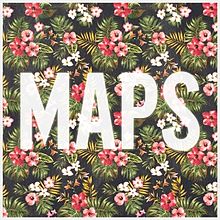 “Maps” is a song by American pop rock band Maroon 5. The song was released on June 16, 2014, as the lead single from their fifth studio album V. The song was written by Adam Levine, Ryan Tedder, Benny Blanco, Ammar Malik, and Noel Zancanella, and produced by Blanco, Tedder, and Zancanella.

“Maps” is an up-tempo pop/pop rock track, with a “breezy guitar lick.” It marks Maroon 5’s departure from the funkier sound for which the band was originally known. Lyrically, the song is about “the search for love, particularly a love that has been lost and needs to be found.” In the chorus, Adam Levine sings, “All the roads you took came back to me / So I’m following the map that leads to you.”

Idolator’s Robbie Daw wrote that similarly to Bruno Mars’ “Locked Out of Heaven”, “Maps” has a “Sting/The Police vibe, particularly with the guitar licks and Levine’s multi-tracked vocal harmonies on the chorus.” He also added that the influence of Ryan Tedder (and OneRepublic’s pop-rock anthems, such as “Counting Stars” and “Love Runs Out”) is evident. Jeff Benjamin of Fuse compared the opening guitar licks to “California-cool sound” of Red Hot Chili Peppers.

Music Times commented, “With his [Levine’s] singsong melody over the relaxed, plucked guitars and subtle drums, Maroon 5 create a chill vibe before building the song into something a bit more powerful. Though Levine’s vocals remain constant, the song soon crescendos into a fuller sound, with a chorus that isn’t so much explosive as it is, well, danceable,” and compared the track to “Payphone”, the lead single from the band’s fourth studio album Overexposed (2012): “The more you think about the two lead singles versus each other, the more they feel the exact same.”

Shortly after its release, “Maps” quickly reached number one on the Billboard Twitter Real Time Trending 140 chart, eventually staying within the upper ranks for several hours. The song also logged close to 1,800 first-day spins on radio which, according to the Nielsen BDS, would amount to a one-day audience impression of seventeen million. Also, the song debuted at number twenty-one on the Billboard Bubbling Under Hot 100 Singles and the song is topping the eight biggest music charts in South Korea, as the first artist to top several charts since the release in Korean music history.

The band announced the video through Twitter and posted a teaser on band’s official Facebook page. Premiered on MTV and VH1 on July 1, 2014, the video, directed by Peter Berg, was uploaded on Maroon 5 VEVO channel the day after. The video begins where Adam Levine visits to the hospital to see his girlfriend (portrayed by Courtney Baxter) and she dies. The next scene, Levine and his girlfriend having a party in the house, then he kissed with another woman (portrayed by Meghan Wiggins), when his girlfriend sees them and leaves him before she was hit by a truck, after the man who trying to defend herself. At the end of the video, Levine looks the same girl from the beginning of the video wearing a red dress and holding each other as they watching television, taking place before the events of the video.

The band performed the song for the first time on June 20, 2014, during their concert at the Bowery Ballroom in New York City. On June 25, the band performed “Maps” on The Today Show to promote their album, V.