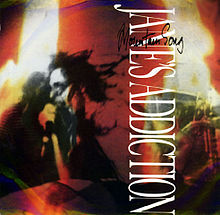 “Mountain Song” is a song by Jane’s Addiction and the second single from their 1988 album Nothing’s Shocking. “Mountain Song” was the first song written by the band in 1985, before a band name had even been decided upon. The song was initially recorded in 1986 and featured on the soundtrack to the film Dudes, starring Jon Cryer. This version can also be found as a track on the 1997 alternate & live cut compilation album Kettle Whistle. “Mountain Song” was re-recorded in 1988 for Nothing’s Shocking.

The single, first released December, 1988 features only the Nothing’s Shocking version and not the 1986 original. The b-side “Standing in the Shower… Thinking” is also taken from Nothing’s Shocking. The single was re-released on April 18, 2009, to help promote the Jane’s Addiction box set A Cabinet of Curiosities, released the same month. The packaging was generally the same but contained several inserts promoting the box set and the band’s albums.

“Mountain Song” was named the 71st best hard rock song of all time by VH1.

Warner Bros. gave Jane’s Addiction a list of producers to choose from. The group chose Dave Jerden, whose work as engineer on the David Byrne and Brian Eno album My Life in the Bush of Ghosts frontman Perry Farrell appreciated. Jerden said he “jumped” at the chance to work with the group.

During the recording sessions, Farrell stated he wanted 50 percent of the band’s publishing royalties for writing the lyrics, as well as quarter of the remaining half for writing music, adding up to 62.5 percent total. Bassist Eric Avery said he and the other band members, guitarist Dave Navarro and drummer Stephen Perkins, were stunned by Farrell’s demands. Farrell refused to compromise. One day Jerden drove up to the studio to find Farrell, Navarro, and Perkins leaving; Farrell told him that the band had broken up and that there would be no record. Warner Bros. called an emergency meeting to resolve the situation. Farrell got the royalty percentage he sought, and the other band members received 12.5 percent each. Avery said the incident had a profound effect on the band, creating an internal fracture.

Not long after the royalties dispute, Farrell and Avery (who had formed the band together) had a falling out. This was the result of Avery’s newfound sobriety as well as an incident where Farrell believed that the bassist had drunkenly tried to pick up his girlfriend. Tensions existed in the band between all the members during recording except for Perkins, who got along with Navarro, Avery and Farrell.

“Mountain Song” was not originally recorded for Nothing’s Shocking, having been previously recorded and released in 1986 on the soundtrack to the film Dudes. Like “Jane Says” and “Pig’s in Zen,” (also known as “Sex is Violence”) it was re-recorded for the album. Musically it is similar to the original version, but the lyrics are sung in a higher key as to be consistent with the rest of the record. The 1986 original eventually saw a more widespread release when it was included on the band’s 1997 out-take/alternate cut/live & new track compilation album Kettle Whistle.

Perry Farrell created the cover image to Nothing’s Shocking, which features a sculpture of a pair of nude female conjoined twins sitting on a sideways rocking chair with their heads on fire. Farrell said the image, like much of his artwork, came to him in a dream. Farrell hired Warner Bros. employees to create the cover sculpture; after learning how to create sculptures by watching them closely, he fired the Warner Bros. staff and created the artwork himself. Farrell hired someone to help create a full body casting of his girlfriend for use as the sculptures. Retailers objected to the album’s cover. Nine out of the eleven leading record store chains refused to carry Nothing’s Shocking, and the record had to be issued covered with brown paper.

Nothing’s Shocking was released in 1988. “Mountain Song” was released as a single; however, MTV refused to air the song’s music video due to a scene containing nudity. Farrell then decided to release the music video commercially; twenty minutes of live footage was added to create the Soul Kiss home video. Due to lack of airplay on MTV and modern rock radio, the album only sold 200,000 to 250,000 copies in its first year of release. Nothing’s Shocking went on, however, to sell over 1 million copies and is certified Platinum in the U.S. by the RIAA.

In a retrospective review, AllMusic’s Greg Prato called Nothing’s Shocking “a must-have for lovers of cutting-edge, influential, and timeless hard rock.” In 2006, Q magazine placed the album at #32 in its list of “40 Best Albums of the ’80s”.

Footage for the “official” music video was shot at the Scream on August 19, 1988. The music video was initially banned from MTV because of obscene features in the video. A censored version was created but MTV still refused to play it for a number of years, finally airing it in 1990.

There are four different versions of the music video: the original, the original censored for MTV, a “director’s cut,” and finally one which was created by a third party contracted out by Warner Bros. after the band’s original version was banned. The band had no input on this version, which was featured in an episode of Beavis and Butt-Head.

Jane’s Addiction, frustrated that Warner had produced a video without their knowledge or input, created the Soul Kiss video as a means to release the official, unedited version to fans. In addition to the “Mountain Song” video, Soul Kiss also featured footage of the band performing comedic sketches and footage of the band performing a song called “City” which wouldn’t appear on an album until the Kettle Whistle compilation in 1997.