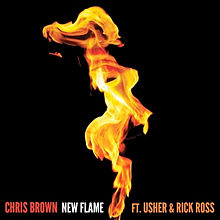 “New Flame” is a song by American R&B recording artist Chris Brown. It was originally released as a promotional single from Brown’s album on March 5, 2014. This version only featured Rick Ross as a guest artist. A few months later, a day after the 2014 BET Awards were held in L.A., the single version of the song featuring Usher was released on June 30, 2014, as the fifth official single from his sixth studio album X. The song has so far peaked at number 27 on the US Billboard Hot 100. It also peaked at #10 in the United Kingdom, making it Ross’ highest charting single there.

A music video for the song was released on August 14, 2014. Rapper Tyga makes a cameo appearance in the video.

Brayden: I love this song.