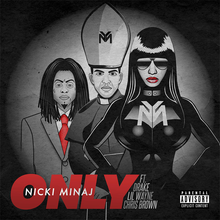 “Only” is a song by American rapper Nicki Minaj, from her upcoming third studio album, The Pinkprint (2014). It was released on October 28, 2014 by Young Money Entertainment, Cash Money Records and Republic Records as the third single from the album. It features additional rap vocals from hip hop artists Drake and Lil Wayne, and also features Chris Brown who sings the chorus of the song. Production was handled by Dr. Luke and Cirkut.

Minaj posted the single cover on Instagram two days before the release, informing that this would be the third single of her upcoming album The Pinkprint.

“Only” received generally positive reviews from critics. Carolyn Menyes from Music Times gave the song a positive review, saying “With a cool sense of confidence and rhymes that boast of her own sexual and rapping prowess, Minaj is taking the reins, leading into the equally vulgar and explosive rap verses from Drake and Wayne”. Brennan Carley from Spin said “‘Only’ is Nicki at her dirtiest and smartest, rapping with metaphors that’d fly over other rappers’ heads while keeping the glint of a knowing wink always in her eye.” Miles Raymer from Entertainment Weekly praised Minaj’s rap and called it the best part of the song. Chris Coplan from Consequence Of Sound said although it wasn’t the strongest effort from them three, the song was “a great display of how their separate and distinct personalities can still play off one another nicely”. Drew Millard from Noisey praised Lil Wayne’s verse and said “Minaj continues to rap laps around the competition and there’s no indication that that’s going to change any time soon”.

Read about and watch the controversial lyrics video at https://www.thissideofsanity.com/music/songs/on/onlylyrics.php.

The accompanying music video for “Only”, which was directed by Hannah Lux Davis, premiered on December 12, 2014. The video opens with an injured man lying on the floor in what appears to be a chamber. He is then taken to room were many other tortured men are tied up in a room. The video then cuts to Minaj who is wearing black-feathered lingerie. She raps wearing a sheer getup and sky-high platform heels. Minaj and Drake standing side by side while Nicki dons what looks like a black lace wedding veil. Minaj, Wayne, and Drake stand in a run-down dungeon as Minaj continues to rap.