“On Top Of The World” by Imagine Dragons

“On Top Of The World” by Imagine Dragons 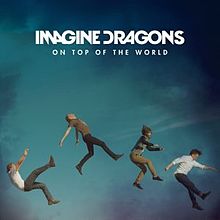 “On Top of the World” is a song written and recorded by American alternative rock band Imagine Dragons for their major-label debut extended play Continued Silence, where it appears as the third track. The song also appears on their debut studio album Night Visions as the fifth track. “On Top of the World” was released digitally as a single on March 18, 2013.

“On Top of the World” primarily features guitar and piano instrumentation, with vocals performed by lead singer Dan Reynolds. Originally published in the key of C major, the song itself expresses a celebration of accomplishment for the band after striving for years to become successful. The song itself incorporates the chords C, F, Dm, and G, with the pre-chorus using G and Am to create a different break in the song. The song “On Top of the World” is found to be a positive, upbeat track, unlike other songs found on Night Visions, including “Bleeding Out” and “Hear Me”. Their electronically based sound, supported by a moderately quick beat and a mix of piano, guitar and drums, creates a positive feel for their audiences.

As a part of the Palladia documentary Imagine Dragons: The Making of Night Visions, which originally aired on November 7, 2012, the band filmed a video of themselves performing “On Top of the World” and subsequently uploaded it to YouTube.

On November 13, 2013 the band released an official music video involving a moon landing. The video was filmed in Utah and includes cameos from Jon Heder, Whit Hertford, the cast of Studio C, singer Aja Volkman, guitarist Robbie Connolly, and members of The New Electric Sound as well as numerous surprise allusions and wordplays.

The song reached a million copies sold in the U.S. in April 2014. It’s the fourth million seller from the Night Visions album.

Olivia: I love this song.