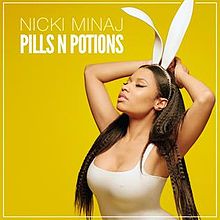 “Pills N Potions” is a song by Trinidadian-American recording artist Nicki Minaj from her upcoming third studio album, The Pink Print (2014). It was released on May 21, 2014 by Young Money Entertainment, Cash Money Records, and Republic Records as the lead single from the record. Minaj collaborated with Cirkut, Dr. Luke, and Ester Dean during the songwriting process, while Cirkut and Dr. Luke were responsible for its production. Backed by a drum beat and a piano, the song is a mixture of hip hop and R&B. The lyrics within the song revolve around someone who has wronged Minaj, but she still loves them.

Upon release the song was met with universal acclaim from music critics; who praised the track, appreciating its cross-over appeal and lyrical content. Commercially, the song has so far peaked at number 42 on the US Billboard Hot 100 and within the top forty in Australia, Ireland, New Zealand and the United Kingdom. The song’s accompanying music video was directed by Diane Martel, who Minaj has previously worked with, and was released on June 9, 2014.

Minaj first mentioned the song in her promo single, “Yasss Bish” which features Soulja Boy. She stated that the single will drop in two weeks. In an interview with Rap-Up TV, she stated that the song was “uplifting” and “very soulful”. Prior to its release, she also described the song with “It sounds like urgency, It sounds like betrayal. It sounds like running. It sounds like fainting. It sounds like love. It sounds like — *gasp!*”, in an interview with Billboard. On May 19, Minaj revealed the official artwork for the single via her Instagram page. She revealed the title of the song at the 2014 Billboard Music Awards and afterwards hosted a Q&A on Twitter where she revealed information regarding the single. On May 21, the full song premiered, worldwide, on her official Soundcloud page with song being available for purchase on iTunes later that day. She also promoted the single through multiple radio interviews including phone interviews with Power 105.1’s nationally syndicated show The Breakfast Club, KIIS-FM’s On Air with Ryan Seacrest, Hot 97’s morning show, Z100 with Elvis Duran and the Morning Show and a sit down interview with Los Angeles based radio station, Power 106 with The Big Boy’s Neighborhood Morning Show.

Sonically, “Pills N Potions” is a slow-burning piano ballad “framed in the druggy imagery of mixtape rap”, written in common time in the key of A minor, with a tempo of 84 beats per minute. A notable departure from her past work, the song combines the genres of pop, hip hop, and R&B. Chris Payne of Billboard said the song coupled a chorus “reminiscent of a Rihanna ballad” with rapped verses. Kory Grow of Rolling Stone said the song shows Minaj “sublimely (and maturely) rising above her detractors, even singing that she still loves them.”

“Pills N Potions” opens with a sparse, haunting drum beat, while Minaj sings the pre-chorus in a feather-like near-whisper, “Pills ’n potions, we’re overdosin’/I’m angry but I still love you”. As the pre-chorus repeats, an echo effect is added to her vocals, and “blooming” chants of “I still love, I still love, I still lu-uh-uhhhv” are sung to create the songs chorus. During the verses Minaj raps with a sense of urgency, however, the first verse is kept restrained as she raps about someone who wronged her, “They could never make me hate you/Even though what you was doin’ wasn’t tasteful/Even though you out here looking so ungrateful/I’mma keep it movin’ be classy and graceful.” Although she later says that she’ll “forgive and forget”, but knows that they’re jealous of her success: “But I spin off in a Benzie/I see the envy when I’m causin’ a frenzy”.

Zach Frydenlund of Complex called “Pills N Potions” a “monster of a song”, saying: “after a few months of steadly dropping her more street singles, Nicki shows—once again—how she can delicately balance pop and hip-hop, while spitting true to her ‘real rap’ promise to fans.” Chris Payne of Billboard felt Minaj was sincere in her delivery of the song’s personal lyrics, and went on to call it a “crowd pleaser” with something for every listener to enjoy. Gil Kaufman of MTV News was also positive in his review, saying: “After coming back hard on the singles “Yasss Bish” and “Chi-Raq,” the nearly four-and-a-half minute “Potions” is actually a huge move back into the pop game, setting Minaj up for what could be her biggest cross-over hit to date.” Although Marc Hogan of Spin found the song’s message confusing, he praised Minaj’s rapping and said that “when we hear that Rihanna-like “I still lo-uh-uh-ve” hook blasting out of car windows this summer? We’ll probably still lo-uh-uh-ve it.” A writer for ClickMusic called “Pills N Potions” a more “traditional” love song compared to those done by Minaj before, and said that “there’s plenty of her personality running through it and a welcome depth to the lyrics this time around.” Kory Grow of Rolling Stone called the song a “piano rap ballad”, and said it comes off as the “diametric opposite” of her last single, “Lookin Ass”.

In the United States, the song debuted at number 47 on the Billboard Hot 100 for the week ending June 7, 2014, having sold 84,000 digital downloads in its first four days of release and amassing 709,000 domestic streams. The song has since peaked at number 42 on the Hot 100 chart. As of June 1, 2014, the song has sold 143,717 digital downloads in the United States according to Nielsen Soundscan.

A music video for “Pills N Potions” was shot on May 13 and 14, by Diane Martel, who also shot Minaj’s “Right Thru Me” video. Minaj released behind-the-scenes photos of the set on her official Instagram account. Minaj revealed, via Twitter, that the video would see her with a look that she never had in a video before. Minaj released two lyric videos for the song on May 28 and June 6 via her YouTube channel. A sneak peek was released via Good Morning America on Friday, June 6, 2014. The music video premiered on her VEVO channel on June 9, 2014. In the video appears the rapper The Game.