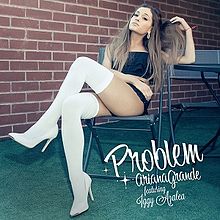 “Problem” is a song recorded by American singer Ariana Grande, featuring a guest appearance from Australian rapper Iggy Azalea. The song was released as the lead single from Grande’s upcoming second studio album, on April 28, 2014, by Republic Records. On May 8, 2014, the song debuted at number 3 on the Billboard Hot 100, becoming her biggest hit in the United States, surpassing “The Way.”

Background and release
After recording multiple songs for her second studio album, Grande decided to use “Problem” as the lead single from the album. Grande then began an online countdown to the release of the song and revealed that Australian rapper Iggy Azalea would accompany her on the track. Big Sean, who is featured in Grande’s previous song “Right There”, provides the whisper-like vocals of the chorus although he is not credited as a featured artist. Grande premiered “Problem” at the 2014 Radio Disney Music Awards, which aired on April 27, 2014. “Problem” was written by Azalea, Ilya, Max Martin, and Savan Kotecha, while Ilya, Shellback and Max Martin produced the song.

Composition
Musically, “Problem” is a pop song with influences of contemporary urban music. Lyrically, the song is about “the feeling of being absolutely terrified to re-approach a relationship that’s gone sour — but you want to more than anything”.

Critical reception
Upon release, “Problem” received positive reviews from critics. Mike Wass of Idolator described the song as “an odd blend of ’90s pop and current urban trends (the trap-lite breakdown and a sax hook a la Jason Derulo’s “Talk Dirty”) but there’s no denying that it’s catchy.” Entertainment Weekly called the song a “dramatic reinvention,” and also notes, “The idea that Grande was collaborating with bad girl du jour Iggy Azalea prompted all kinds of speculation, and the result is more or less what everybody expected: Grande’s enviable pipes are still the centerpiece, but she also invites a sax-drunk loop, sexy whisper tracks, and Azalea’s Jay Z-referencing high-speed verse to the party as well.” Music Times commented that “the saxophone-filled track continues the pattern set by Grande’s 2013 debut album Yours Truly by being heavily influenced by the ’90s R&B scene. This time, ‘Problem’ pulls from the funky, funky streets with a jazz-influenced riff. An overwhelming (but welcome) dose of saxophone leads the song before the more modern drum-filled beat drops.” Pitchfork named it “Best New Track” saying the track “bears all the hallmarks of a future smash, as if the future wasn’t actually right now.”