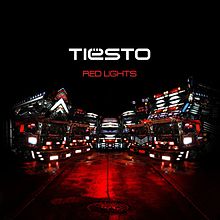 “Red Lights” is a song by Dutch musician, DJ and record producer, Tiësto. The song features uncredited vocals from Michel Zitron, who co-wrote the song with Wayne Hector, Carl Falk, Rami Yacoub, Tijs Verwest and Måns Wredenberg. “Red Lights” was first released on December 13, 2013 through PM:AM Recordings as the lead single from Tiësto’s forthcoming fifth studio album, A Town Called Paradise.
“Red Lights” is mostly a musical change from Tiësto’s previous releases as it departs from his trademark trance influenced sound and sees him experimenting with new genres through the incorporation of acoustic elements into his music, which highlights his ability to adapt to the expanding EDM market.
“Red Lights” received generally mixed reviews from contemporary music critics and performed moderately well in most major music markets. It became Tiësto’s first number-one hit in Scotland and his highest charting single in Ireland, the United Kingdom and Australia. Additionally, “Red Lights” also became Tiësto’s first charting single in the United States, where it has so far peaked at number sixty on the US Billboard Hot 100. The song also enjoyed success on the US Dance charts, peaking at number-two on the US Billboard Hot Dance Club Songs and number-six on the US Billboard Hot Dance/Electronic Songs charts.

Reception
Bill Lamb from About.com spoke positively about “Red Lights”, describing it as a “wistful dance track that brings all the audio excitement of club music without any lyrics likely to offend” and subsequently ranked the song tenth on his list of “Top 10 Clean Party Songs for Kids”. However, the song was not as well received by Joe Bish of The Guardian. In his review of newly released songs during the final week of February 2014, Bish initially praises the track, calling it “real dance music” but ultimately concludes that “it will come back to haunt you. Maybe not today, maybe not tomorrow, but soon, and for the rest of your life”.

Music video
The song’s accompanying music video was released on February 10, 2014 and runs for approximately three minutes and thirty-two seconds. Tiësto describes “Red Lights” as a song about “letting loose of your inhibitions and running free” and states that the song’s music video is a reflection of this. The video centres on two close friends who embark on a road trip to Las Vegas to attend one of Tiësto’s shows in Hakkasan.

Moshe: This is Tiësto’s best song.