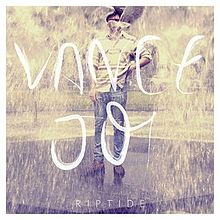 “Riptide” is a song by Australian singer-songwriter Vance Joy. It was first released as a track on his debut EP God Loves You When You’re Dancing (2013), serving as its second single, and is also featured on his debut studio album Dream Your Life Away (2014). The song was written by Joy, who also produced it with drummer Edwin White. The upbeat indie folk song has been lyrically described as a “coming of age love story” and is known for its metaphors and pop culture references.

The song received positive reviews from music critics, who praised its lyrics, vocals and production and drew comparisons to singer-songwriters Paul Kelly and Jeff Buckley. “Riptide” would go on to have commercial success in Australia, peaking at number six on the ARIA singles chart and subsequently being named the number one song in radio station Triple J’s Hottest 100 of 2013. The following year, “Riptide” also peaked at number ten in the United Kingdom and entered Billboard’s Alternative Songs chart, peaking at number 1.

The song’s first few chords and first two lines were originally written at his Glen Iris home in 2008 with the same title, but shelved. Years after his experience in university and a VFL career, Vance Joy started doing open mic gigs in Melbourne which slowly rose to a serious career in music. When recording the song back in 2012, a year before the EP came out, Vance Joy was writing a song and then it reminded him of the shelved “Riptide” draft from 2008 and combined it with his current project. A rough version of the song was uploaded on his personal Facebook account. Although the singer believed it was “…just the first verse and chorus,”, the encouraging response from his friends and family continued the artist’s music career.

Vance Joy initially recorded and produced the song with drummer Edwin White in just one afternoon at Red Door Studios in the Melbourne suburb, Brunswick, with subsequent additional production from John Castle.

In an interview, Vance Joy said the title of the song came from a motel of the same name he used to go to with his family when he was a child. The song was recorded at a tempo of 102 BPM. The key appears to be around an 1/8 of a tone below D flat major.

A music video to accompany the release of “Riptide” was first released onto YouTube on 2 April 2013 at a total length of three minutes and twenty-four seconds. The video, directed by Dimitri Basil, artistically depicts the song word for word.

Vance Joy performed Riptide at the 2014 MTV Europe Music Awards in Glasgow,Scotland at the O2 Academy Glasgow as part of the backstage show.