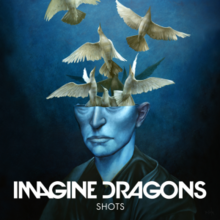 “Shots” is a song by American alternative rock band Imagine Dragons. It was written by band members Ben McKee, Daniel Platzman, Dan Reynolds and Wayne Sermon and released as the third single from their second studio album Smoke + Mirrors (2015).

The song shows influence of industrial music with heavy use of synthesizers. Reynolds’ vocals are light, despite the dark lyrical content, recalling music from the 1980s. Sermon’s guitar textures add complexity.

Imagine Dragons performed the track during a first ever live commercial (for Target) during the Grammy Awards (2015). The ad was filmed on Las Vegas’ Freemont Street under the direction of Jonas Åkerlund. The ad promoted an exclusive edition of the album available at Target which includes four bonus tracks. It was estimated to cost $8 million and charted at #2 on the Billboard Trending 140.

On February 12, 2015, Imagine Dragons released the official music video for “Shots”. The video was directed by Robert Hales and was inspired by the artwork created by San Diego based painter Tim Cantor. The same artwork also serves as the cover art for all of the singles for the album. Cantor himself appears as the live depiction of one of his paintings.

Gianna: Shots is my favorite song.