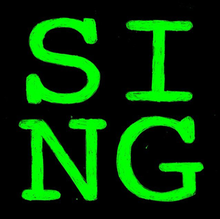 “Sing” is a song by English singer-songwriter Ed Sheeran. It features production and additional vocals from Pharrell Williams. The song was released as a digital download on 7 April 2014, serving as the lead single for his upcoming second studio album, x.

Three years after the release of his debut album, +, Sheeran announced that he hoped he would release his second album during 2014. The song was written by Sheeran and Pharrell Williams, produced by the latter, and has a length of 3 minutes and 55 seconds. The song, which has pop and R&B influences and was inspired by singer Justin Timberlake, is a considered a departure from Sheeran’s folk rock sound he became known for on his album +. Sheeran was inspired to model the song after the pop and R&B stylings of Timberlake, stating “It was pretty close to a direct inspiration. I love Justified and FutureSex/LoveSounds, so I took inspiration from those.” The lyrics are about “a night out in Vegas.”

In an interview with Zane Lowe for BBC Radio 1, promoting the first single, “Sing”, Sheeran talked about getting in the studio with Pharrell and him “playing [Sheeran] a lot of things, and then it stuck on this one riff”, which eventually became the basis of the track. He stated he has always been a fan of R&B, but was just “trying to find the right way to make it”. Sheeran expressed wishes to create an entire album with Pharrell, and “Sing” was to be a song for that project, but several musical peers, including Elton John, Taylor Swift and Pharrell himself, urged Sheeran to release it with X. Justin Timberlake’s debut album, Justified, was a favourite of Sheeran’s, which he consciously tried to channel for “Sing”. On working with Pharrell, Sheeran told MistaJam on BBC Radio 1Xtra that they had written two other songs together that were in the style he “usually did”, but for “Sing” he was pushed “out of [his] comfort zone” which made the track stand out. Pharrell reportedly said that he wanted to “shake the world’s view of [Sheeran] up” and make pioneering songs that no singer/songwriter has done before rather than just “a cool record”. A remix of the track has been made with Korean recording artist Psy, and the music video for the song was based on a night out with the artist.

The song received critical acclaim upon release, with music critics complimenting Sheeran’s change of sound, and likening the song to the works of Justin Timberlake. Time gave the song a very positive review, saying that it is “more of a departure. It fits the times nicely: there’s some of fellow Brit Sam Smith in Sheeran’s rubbery falsetto, plus some of Robin Thicke’s ubiquitous ‘Blurred Lines’ in the percussion. But Sheeran’s really got his heavy-breathing, hyper-flirtatious sights on another, older target: Justin Timberlake’s solo debut ‘Like I Love You’,” adding that “Countless artists have died on that hill, from former boy banders trying to reinvent themselves in Timberlake’s image, to teen idols in protracted growth spurts, to Timberlake himself on parts of The 20/20 Experience. But Sheeran brings legit musicianship, not just branding, to the tune, and his vocal tics and the ‘Billie Jean’ percussion suggest he might be looking back even further, to Michael Jackson’s imperial phase.”

In a positive review, The Guardian said that “while Pharrell’s influence is writ large, there’s enough of Sheeran there to prevent it coming across as horrible pastiche.” The Hollywood Reporter also gave the song a positive review, stating that “Sheeran’s fragile voice, as heard on past hits like ‘The A Team’ and ‘Lego House,’ has now morphed into a confident croon, unafraid of diving into a deep bag of melismas, boisterous chants and rapid-fire rhymes in order to convince his female subject of his desires.”

The music video for “Sing” was released exclusively to Sheeran’s Facebook page on 22 May 2014, and added to Vevo and YouTube on 23 May, exactly a month before the album was released. It follows a puppet caricature of Sheeran on a night out, during which he gets drunk, sings karaoke, goes to a strip club and picks up Sheeran and the song’s producer, Pharrell, from a studio in his truck. The puppet is currently in Sheeran’s safekeeping, but he has “no idea how to work it yet”.

Sheeran performed the song live for the first time on Saturday Night Live on 12 April 2014, along with a song called “Don’t” he debuted off the album. Sheeran also performed “Sing” on the Ellen Show on 16 May 2014, and on the Britain’s Got Talent semi-final on 27 May 2014.

On the week of 14 April 2014, the song entered the New Zealand Singles Chart at number 8, becoming his fourth top 10 single and second top 10 debut in New Zealand.

“Sing” debuted at number one on the Australian ARIA Charts in May 2014, making it Sheeran’s first number one in the country, and his sixth top ten single in Australia.

The song debuted at number one on the UK Singles Chart, giving him his first ever number one single in his home country.