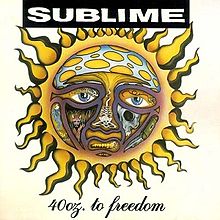 “Smoke Two Joints” is a song originally written by The Toyes, who performed it in traditional Reggae style and released it in 1983. According to The Toyes, “one fine fall day on a small island” of Oahu in Hawaii, two of the band members, Jim and Sandy, were sitting under a large banyan tree on Kuhio Beach, “tokin’ on some sweet bud & jammin’ on a rootsy reggae funky town” when they conceived the song “Smoke Two Joints.”

For decades, the San Francisco radio station KFOG has played the song at 5:00 pm every Friday. The song debuted on the Dr. Demento syndicated radio program and quickly disappeared. The song was then rediscovered and first popularized on a commercial FM station by morning DJ Sea Bass at WXTB in Tampa, who began playing the song regularly as the opening music to his show. It was featured on the soundtrack for the 1998 American comedy-thriller film Homegrown. The Toyes version was featured in the 2005 video game NARC. The song is often mistakenly attributed to Bob Marley on the internet and file sharing websites. Bob Marley had been dead two years when this song was written.

The punk/ska band Sublime performed a cover version on their 1992 debut album 40oz. to Freedom. “Smoke Two Joints” was one of the first Sublime songs to be played on the radio after “Date Rape”. This cover includes samples taken from the film Beyond the Valley of the Dolls (though this intro is typically removed when the song is played on the radio), of a bong being used, and of the artists Eazy E and Just Ice. Bert Susanka, the lead singer of The Ziggens (a major influence on Sublime), is also sampled saying, “Smoked cigarettes ’til the day she died!” The track is also featured on the 2003 film Grind and is on the Grind motion picture soundtrack as a somewhat shorter version. The track is also used in the film Mallrats when the contestants for a game show are passed out on the floor.