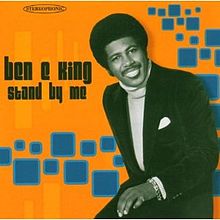 “Stand by Me” is a song originally performed by American singer-songwriter Ben E. King. It was written by King, Jerry Leiber and Mike Stoller, inspired by the spiritual “Lord Stand by Me”, plus two lines rooted in Psalms 46:2â3. There have been over 400 recorded versions of the song. The song is featured on the soundtrack of the 1986 film Stand by Me.

According to the documentary History of Rock ’n’ Roll, Ben E. King had no intention of recording the song himself when he wrote it. King had written it for The Drifters, who passed on recording it. After the “Spanish Harlem” recording session, he had some studio time left over. The session’s producers, Jerry Leiber and Mike Stoller, asked if he had any more songs. King played “Stand by Me” on the piano for them. They liked it and called the studio musicians back in to record it.

I remember arriving at our office as Jerry and Ben were working on lyrics for a new song. King had the beginnings of a melody that he was singing a cappella. I went to the piano and worked up the harmonies, developing a bass pattern that became the signature of the song. Ben and Jerry quickly finished the lyrics … .

In another interview, Stoller said:

“Ben E. had the beginnings of a song—both words and music. He worked on the lyrics together with Jerry, and I added elements to the music, particularly the bass line. To some degree, it’s based on a gospel song called “Lord Stand By Me”. I have a feeling that Jerry and Ben E. were inspired by it. Ben, of course, had a strong background in church music. He’s a 50% writer on the song, and Jerry and I are 25% each…. When I walked in, Jerry and Ben E. were working on the lyrics to a song. They were at an old oak desk we had in the office. Jerry was sitting behind it, and Benny was sitting on the top. They looked up and said they were writing a song. I said, “Let me hear it.”… Ben began to sing the song a cappella. I went over to the upright piano and found the chord changes behind the melody he was singing. It was in the key of A. Then I created a bass line. Jerry said, “Man that’s it!” We used my bass pattern for a starting point and, later, we used it as the basis for the string arrangement created by Stanley Applebaum.”

The personnel on the song included Romeo Penque on sax, Ernie Hayes on piano, Al Caiola and Charles McCracken on guitars, Lloyd Trotman on bass, Phil Kraus on percussion, and Gary Chester on drums. Songwriting credits on the single were shown as King and Elmo Glick—a pseudonym used by Leiber and Stoller.

King’s record went to No. 1 on the R&B charts and was a Top Ten hit on the U.S. charts twice—in its original release in 1961, when it peaked at No. 4, and a 1986 re-release coinciding with its use as the theme song for the movie of the same name following its appearance in the film, when it peaked at No. 9, and also in an advertisement for Levi Jeans. It also reached No. 1 on the UK Singles Chart in 1987 after its re-release, mostly because of the jeans spot, originally reaching No. 27 on its first release.

The song was not released on an album until it had been out as a single for two years. The song appeared on King’s Don’t Play That Song! album.

“Stand by Me” was ranked 122nd on Rolling Stone’s list of the 500 Greatest Songs of All Time. In 1999, BMI named it as the fourth most-performed song of the 20th century, with about seven million performances.

On March 27, 2012, the Songwriters Hall of Fame announced that “Stand by Me” would receive its 2012 Towering Song Award and that King would be honored with the 2012 Towering Performance Award for his recording of it.

The song uses a version of the common chord progression now called the 50s progression, which has been called the “‘Stand by Me’ changes” after the song.

Haley: Stand By Me is Charlie’s favorite song.