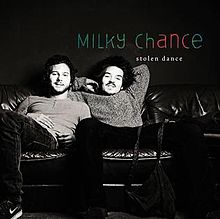 “Stolen Dance” is a song by German duo Milky Chance. It was first uploaded to YouTube 4 April 2013 before completion of their debut album and quickly became a viral hit, racking up millions of views and leading to several sold-out tour dates for the band. The song was first released on their own label on 5 April 2013 as a single and reached number one in Austria, France, Belgium (Wallonia), Switzerland, Poland, Czech Republic and Hungary. With all the success in Europe in 2013 and additional touring, the single was made available in a radio edit version and on two different versions of EP under various labels in 2014 in Luxembourg (where it also went to number one), Australia, US, Canada, New Zealand, and Ireland. A 4-track “Stolen Dance EP” (including the single “Down By The River”) was released by Lichtdicht Records and Republic Records on 9 May 2014. The song has continued to chart in countries where it has not yet been released, such as the UK, which does not yet have a scheduled release date, although it was included on BBC1’s “B List” the week of 23 June 2014. In the US, iTunes.com gave the song a release date of 17 June 2014, offering the Stolen Dance single (original mix) for free.