“Take Me To Church” by Hozier

“Take Me To Church” by Hozier 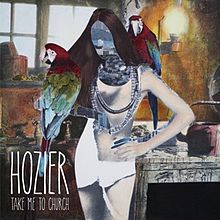 “Take Me to Church” is a song by Irish recording artist Hozier, released as a single in 2013 and taken from the EP Take Me to Church. It is also the first track of his self-titled debut album.

The song entered the Irish Singles Chart in October 2013 and reached number two, where it stayed for four weeks. In May 2014, Hozier performed the song on The David Letterman Show.[1] It was sent to US modern rock radio on 24 June 2014 by Columbia Records.

Lyrically, Take Me to Church is large metaphor, with the protagonist comparing his lover to religion.

Hozier states to The Irish Times, “I found the experience of falling in love or being in love was a death, a death of everything. You kind of watch yourself die in a wonderful way, and you experience for the briefest moment — if you see yourself for a moment through their eyes — everything you believed about yourself gone. In a death-and-rebirth sense.”

This song was written in the wake of a breakup with his first girlfriend, calling it both a love song and a contemplation of sin. Hozier described it to The Guardian as, “a bit of a losing your religion song.”

The music video for “Take Me to Church” was directed by Brendan Canty and was released on 25 September 2013. The video, shot in grayscale, follows the relationship between two men in a same-sex relationship and the violently homophobic backlash that ensues when the community learns of one of the men’s sexuality. Hozier himself does not appear in this video.

Ireland’s State magazine noted that the video echoes the wave of violence currently plaguing the lesbian, gay, bisexual and transgender community in many parts of the world, particularly Russia. “The song was always about humanity at its most natural, and how that is undermined ceaselessly by religious [organizations] and those who would have us believe they act in its interests. What has been seen growing in Russia is no less than nightmarish, I proposed bringing these themes into the story and Brendan liked the idea.”