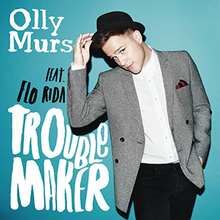 “Troublemaker” is a song by British recording artist Olly Murs, released as the lead single from his third studio album, Right Place Right Time (2012). It features American rapper Flo Rida. “Troublemaker” was co-written by Murs, Steve Robson, Claude Kelly and Flo Rida, and was produced by Robson. The song premiered on 8 October 2012, in the United Kingdom on the Capital FM radio station and was made available to download on 12 October in certain international territories.
“Troublemaker” was a major commercial success. In the United Kingdom, the song debuted at top of the UK Singles Chart, making it Murs’ fourth single to reach number one and his first to spend more than a week at the top spot. It also served as the closing song at Murs’s 2013 arena tour.

Background and release
“Troublemaker” was written by Murs along with Claude Kelly and Steve Robson, with whom he also wrote his previous hits “Please Don’t Let Me Go” and “Dance with Me Tonight”. Lyrically Murs has said that the song is about “that special girl that you can’t shake off, even if you know you should because, let’s face it, she’s got a bit of a wild side.”
Of Flo Rida’s appearance on the track, Murs said that he had expected getting him to appear on the track to be difficult but that it was “kind of easy, in a way. [It] wasn’t hard … We just literally sent him the track, his people heard the track and they really liked it. And Flo Rida was like, ‘I really want to do it’. So he was up for doing it.” Flo Rida spoke about Murs and his appearance on the track during a promotional interview for his single “I Cry” on ITV breakfast show Daybreak on 26 September 2012, saying: “I’m very excited, [my record company said] we have this record from a guy named Olly. As soon as I heard it, I know a hit record when I hear it. I’ll probably have a chance to meet him soon.” “Troublemaker” premiered in the United Kingdom on 8 October 2012 on Capital FM. The premiere was followed by a “bold and colourful” lyric video that was posted on Murs’ Vevo account. At a launch party for the album, Murs revealed that “Troublemaker” was originally meant to be the second single from the album with “Army of Two” being the first single, but this idea was scrapped due to Murs’ work in America.

Composition
“Troublemaker” is an uptempo pop song which lasts for a duration of 3:06 (three minutes and 6 seconds), containing influences of soul. According to the digital sheet music published by Alfred Music Publishing, “Troublemaker” is written in the key of C Minor and it is set at a groove of 108 beats per minute. The hook is written in E flat major. Described as an “airy pop anthem” the songs’ instrumentation consists of “lightly funky, guitar-led backdrop” which was compared to Maroon 5’s This Love and Misery.

Music video
Background
The official music video was filmed in Los Angeles, California over two days, on 21 and 22 September 2012. An American casting agency site revealed in their advert that the story of the video revolves around Murs and a female lead who is “so ditzy she keeps getting fired from her jobs, and by coincidence, keeps crossing paths with Olly.” Another casting agency released a montage of pictures from the set of filming of the video on their Facebook page on 26 September, including a shot of Murs being arrested by a police officer which did not make the final version. Flo Rida filmed his part of the video separately to Murs in Miami, Florida on 30 September, and released a picture of himself at the filming location on his Instagram account that same day. Newspaper The Sun published some further photographs of Murs from the filming of the video on 8 October 2012. The video premiered on Murs’ YouTube account on 22 October 2012 and has since been viewed over 65 million times.
Synopsis
The video starts with Murs entering a cafe, where he sees a young woman (played by actress Danielle Beckwith) working as a waitress there. She pours water on a customer in retaliation to him smacking her bottom, causing her to be fired by her boss. He then meets the woman again, who is now working in a record shop and sees her stacking records (including one that has picture of Murs on it that says “Olly Murs’ Greatest Hits”), but due to her wearing headphones she can’t hear what a customer is saying to her and gets fired again. Next, Murs sees her working at a clothes store where she is dressing mannequins but when she notices Murs watching her she ends up knocking them over and then takes her jacket and leaves the store. Flo Rida is then seen in a billboard on a beach next to a luxury car with two bikini clad women inside it. The video ends with Murs seeing the woman again, this time in a nightclub with friends where she accidentally knocks over a man carrying a tray of drinks, setting off a further chain of unfortunate events. Murs comes to her rescue and the two begin to leave but are stopped by one of the club’s bouncers.