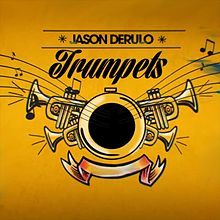 “Trumpets” is a song by American singer-songwriter Jason Derulo, released as the fourth single in Australia, New Zealand and the European market and third single in the UK, from his third studio album, Tattoos (2013). The song was written by Derulo (under his real name Jason Desrouleaux) and Jon Bellion, who also handled the production.

Although the song wasn’t released as a single in the United States at the time, it was included on the US version of the album, Talk Dirty (2014) and since has peaked at number 33 on the US Billboard Hot 100. “Trumpets” was released in the US as the fifth single from Talk Dirty. It was sent to US pop and rhythmic radio on August 19, 2014.

Following the release of “Marry Me” as the third single from his album Tattoos in the US and some international markets, “Trumpets” was released as the fourth overall single from the album to the UK and European territories. “Trumpets” was written by Jason Desrouleaux and Jon Bellion who also handled the production. The song was recorded by Vince Watson at Atlantic Studios in Hollywood, California. with additional recordings by Josh Collins and Juan P. Negrete. It was mixed by Roberto “Tito” Vazquez at Plush recording Studios in Orlando Florida. It was mastered by Tom Coyne at sterling Sound in New York.

“Trumpets” is a midtempo R&B and pop song written in the key of C major, that runs for a duration of three minutes and thirty seven seconds and was written by Jason Derulo and Jon Bellion, who also handled that songs production. Lyrically the song is about being so in love with and infatuated with someone that every time you’re together, trumpets blast through your head, as heard in the lyrics “Every time that you get undressed/ I hear symphonies in my head.” It also states how various features of Jason’s girlfriend remind him of other songs by Coldplay (her eyes—possibly “Green Eyes”) and Katy Perry (her bra—possibly “California Gurls”, in the video for which Perry dons a distinctive cream-shooting bra).

On October 11, 2013, the official lyric video for the song premiered on Derulo’s official YouTube channel, after which he tweeted “#trumpets #tattoos” with a link to the video, to help promote the songs release. The music video for “Trumpets” made its world premiere online through Derulo’s official YouTube channel on November 3, 2013. The video depicts Jason trying get intimate with his girl, But just as the clothes come off he is bombarded by the sound of instruments, while a marching band that bursts into his bedroom out of nowhere to ruin the mood. The music video was directed by Jason Derulo as his directorial debut alongside Colin Tilley who has directed many of Derulo’s previous videos and was produced by Jamee Ranta. Derulo got backlash for the video from his record label for directing the video saying “it wasn’t the right move or look, because I directed it.” states Derulo. He worked on it with Collin Tilley and got pictures in the background, singing the lyrics along with him.

Derulo performed “Trumpets” live for the first time in the UK on BBC Radio 1 1Xtra special performance in the Live Lounge. He also performed the song at the Capital FM Jingle Bell Ball on December 8, 2013, along with his debut single “Whatcha Say”, “The Other Side”, “In My Head”, and “Talk Dirty”. Derulo made his first televised performance of the song during a promotional tour in the UK on The Paul O’Grady Show on December 10, 2013. Derulo also performed this track on New Years Day for the Dick Clark post show. On July 4, 2014, Derulo performed it on Good Morning America as part of its Summer Concert Series. He performed the song during the MDA Show of Strength that aired on August 31, 2014, but was taped in May 2014.

The artwork for the single features several of the same trumpet seen in Derulo’s CGI neck tattoo on the album cover of Tattoos. On November 7, the single was first released in the UK. It was added to the playlist of British urban contemporary station BBC Radio 1Xtra. It has since been released to many international territories while “Talk Dirty” was released in the US as the third single.

“Trumpets” first appeared on the Dutch Top 40 in the Netherlands issue dated November 30, 2013, debuting at its current peak position of number 22. In Australia, “Trumpets” debuted at number 22 the ARIA Singles Chart issue dated December 15, 2013: it reached its peak position of number one in its fourth week on the chart. It has also made an appearance on the New Zealand Top 40 Singles Chart, where it debuted at number 31, and has since reached its current peak of number 3.

“Trumpets” made its debut on the UK R&B Singles Chart at number fifteen, it has since reached its peak position of number one in its fifth week on the chart. It reached number 4 on the UK Singles Chart, becoming his third Top 10 single from the album and his eighth overall. “Trumpets” remained at fourth position for four consecutive weeks.