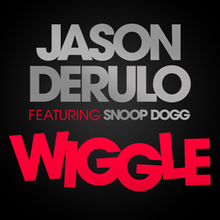 “Wiggle” is a song by American singer-songwriter Jason Derulo, released as the fourth single from his fourth studio album, Talk Dirty (2014) in Europe and North America. The song features American rapper Snoop Dogg.

A music video for the song was released on YouTube on May 21, 2014. It was directed by Colin Tilley and features a cameo appearance from R&B singer Ne-Yo.

The song has so far peaked at number 5 on the Billboard Hot 100, making it Derulo’s fifth and Snoop Dogg’s twelfth top 10 single on the chart.