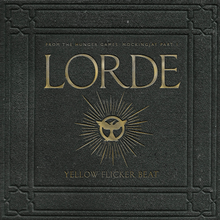 “Yellow Flicker Beat” is a song by New Zealand recording artist Lorde. Written by Lorde and Joel Little and produced by Paul Epworth, the song was released on 29 September 2014 as the lead single from the soundtrack for The Hunger Games: Mockingjay — Part 1 by Republic Records. “Yellow Flicker Beat”, which features an electronic production, is characterised as an art pop and electropop song. Its style was compared to that of Lorde’s earlier releases such as her song “Biting Down” from The Love Club EP (2013) and her debut studio album Pure Heroine (2013). The lyrics of the track reference the rise of The Hunger Games’ heroine Katniss Everdeen.

The track was well-received by music critics, who praised its lyrical content for being more mature than that of Lorde’s previous releases. Commercially, “Yellow Flicker Beat” peaked at number seventy four on the US Billboard Hot 100 and entered the record charts of several nations, including Australia, Canada and New Zealand. A music video for the song was directed by Emily Kai Bock and was released on 7 November 2014. Four days later, the makeover of the song titled “Flicker (Kanye West Rework)” co-produced by Lorde and Kanye West was released. Lorde is scheduled to perform the song at the 2014 American Music Awards on 23 November 2014.

The song was written by Lorde and Joel Little and produced by Paul Epworth. “Yellow Flicker Beat” was recorded at the Lakehouse Recording Studios in New Jersey on 28 and 29 August 2014. The song was engineered by Matt Wiggins and Erik Kase Romero. On 29 September 2014, “Yellow Flicker Beat” was released digitally on the iTunes Stores worldwide by Republic Records. The same day, it was sent to Italian contemporary hit radio and US adult album alternative (AAA) and modern rock stations.

“Yellow Flicker Beat” lasts for a duration of 3:52 (three minutes and fifty two seconds). The Sydney Morning Herald’s reviewer Bernard Zuel characterised it as an electropop song and noted the electronic production on the song. Meanwhile, Billboard’s Jason Lipshutz shared that the track explored Lorde’s art pop sensibilities. The song features Lorde’s “brooding croon” over minimal synthesisers and rattling drums. Alex Young and Michelle Geslani from Consequence of Sound labelled the song a throwback to Lorde’s debut album Pure Heroine (2013). Brennan Carley from Spin compared the style of “Yellow Flicker Beat” to that of Pure Heroine (2013) for the “typically sweeping themes and moody, electronically enhanced melodies.” He eventually draw comparisons between the track and “Biting Down” (from The Love Club EP). Lipshutz wrote that the hook from the song reminded of Lorde’s “Team” (2013).

The lyrics of “Yellow Flicker Beat” reference the rise of The Hunger Games’s heroine Katniss Everdeen. The song begins with a slow and measured start, which features the “touched by pain” lyrics “I’m a princess cut from marble / smoother than a storm.” As the drums start, Lorde sings “This is the start.” Zuelit opined that the line was “also the beginning of the end of something. Not their innocence, already sacrificed for a higher goal, but definitely any easy comfort.” Carley pointed out that the lines “The scars that mark my body / They’re silver and gold” and “My blood is a flood of rubies, precious stones” showcased “a big step towards more mature lyrics.”

Writing for Spin, Carley praised the metaphorical and mature lyrics of “Yellow Flicker Beat”. Meanwhile, Reed complimented on the song’s production, writing that the song “fits comfortably within the 17-year-old’s sonic wheelhouse.” On behalf of The Sydney Morning Herald, Zuel labelled the track “another smart musical, as much as career, step by Lorde”. Billboard’s Steven J. Horowitz opined that Lorde’s voice complemented the song’s beat well, and rated it three and a half out of five stars. Chris Schulz of The New Zealand Herald wrote that “Yellow Flicker Beat” sounded too similar to Lorde’s previous work, and lamented the lack of a catchy hook and chorus. Lydia Jenkin, also from the Herald, pointed out that its purpose was to promote the Mockingjay soundtrack, not a Lorde studio album, and lauded the song as “a perfect musical depiction of Katniss Everdeen”.

In the United States, “Yellow Flicker Beat” debuted at number seventeen on the Billboard’s Alternative Songs chart. In doing so, Lorde logged the highest launch by a female artist on the chart since 1995 when Juliana Hatfield’s “Universal Heart-Beat” also debuted at number seventeen. Additionally, the single appeared on the Adult Alternative Songs at number nineteen with 5.2 million radio audience impressions in first-week audience. On the Billboard Hot 100, the single has peaked at number seventy four. “Yellow Flicker Beat” also fared on several national record charts, including Australia (number thirty-three), Canada (number fifty-one), Ireland (number eighty-three), and the United Kingdom (number ninety-nine). The single was a success in New Zealand, peaking at number four on the New Zealand Singles Chart.

The music video for “Yellow Flicker Beat” was directed by Emily Kai Bock, and was released on 7 November 2014 at midnight (NZDT), when Lorde turned eighteen years old. The video starts with Lorde singing in a faintly lit motel room, where her hair is done up in a pompadour. Afterwards, the clip showcases Lorde in several different locations: a kitchen, a highway, an airplane hangar and a 1920s-inspired cocktail party. For each location, Lorde is seen with different styles, costumes and makeups. During several scenes, Lorde “shows off her twitchy, witchy dance moves.”

Billboard’s Zach Dionne complimented the fashion choice on the video, calling it “awesome”. Jon Blistein of Rolling Stone opined that the music video had little to do with The Hunger Games’ concept; however, it did capture “the alienation and defiance that fuels Katniss.” Likewise, Andrew Untergerger from Spin wrote that the clip was “disappointing [because] there’s no actual Hunger Games footage in there”, yet complimenting on its overall production and called it “cinematic.” On behalf of MTV News, Abby Devora wrote that Lorde “is […] truly coming into her own” and named it a welcome change from Lorde’s previous videos.

On 2 October 2014, Lorde performed “Yellow Flicker Beat” for the first time at Hearst Greek Theatre in Berkeley, California. Later that month, she gave a live rendition of the track at the ACL Music Festival. Lorde is scheduled to perform the song at the 2014 American Music Awards on 23 November 2014.

Lorde and Kanye West produced a version of the song titled “Flicker (Kanye West Rework)”, which was also included on the Mockingjay soundtrack album, at a Malibu, California studio. The track was made available for purchase on 11 November 2014 as one of the pre-order tracks from the soundtrack. Talking about the collaboration with West, Lorde commented, “He’s so private I feel weird talking about how he does stuff. I feel lucky to even be in a room with him.” The track incorporates stripped-down production, “creepy textural” synthesisers and “booming, echo-laden” beats and does not feature West’s vocals. According to a number of critics, the production on it is reminiscent of West’s album Yeezus (2013). Emilee Lindner from MTV News deemed the rework as “creepy in an epic way.”